The Road to Title 5: In the Beginning, There Was No Light

This is the second segment of AFGE’s 4-part series: The Road to Title 5: TSA Officers’ Fight for Dignity on the Job Changed TSA

Peter Winch had set up a meeting with Transportation Security Officers (TSOs) at the Providence airport in Rhode Island. It was in the early days of AFGE’s campaign to bring workers’ rights to the newly created agency and make sure they had workplace protections enjoyed by most federal workers.

It was his first trip there as a national organizer from AFGE. He already had in place a committee made up of TSOs who volunteered to be union reps. He was going to meet with TSA officers at a hotel right at the airport to talk about AFGE and why the officers wanted to join the union.

There were two shifts. In order to allow as many officers as possible to attend, the meeting had to be held at noon. Winch was already at the conference room he had rented for $200 when he got a phone call from the committee at 11 o’ clock.

The Federal Security Director, the number one TSA guy at the airport, had just instructed officers that they may not attend the meeting if they were in uniform. The committee wanted to know if AFGE was going to continue or cancel the meeting.

“What should we do?” they asked.

Winch told them the union was not going to cancel. He told them to follow the rules. If the officers couldn’t come, they shouldn’t come. These were the times when the Bush administration was openly hostile to unions, and we didn’t want to get anyone in trouble.

At noon, 125 people showed up – almost everybody who worked at the airport. The men came in bare-chested. The women came in with garbage bags over their uniform.

“They were packed down the hall. I had to shout to be heard,” Winch recalled. “It was the real show of strength.”

Providence was a big union town, but that fact didn’t prepare him for the enthusiasm, bravery, and solidarity these officers demonstrated. They wanted to hear what Winch had to say about the union. They wanted to know how they could be a part of it.

Five hundred fifty-five miles away in Pittsburgh, Pa., Kimberly Kraynak had been working for TSA at Pittsburgh International Airport for six months. Like her fellow TSOs, she was occupied with the immediate mission of preventing another terrorist attack. This was 2002. 9/11 was still fresh in her memories, and so the topic of how TSA management ran the agency never crossed her mind. She knew nothing about the administrative aspect of our government.

But that changed when a fellow TSO was about to get fired for talking about forming a union. There had been a lot of turmoil at the Pittsburgh airport – management were harassing and threatening workers.

Seeing how people around her were suffering – the people who shared that strong desire to protect this country, who completely believed in their mission – she agreed to take over and get involved in the union.

That’s when she started reading TSA directives carefully and calling them out on things that didn’t make sense. Her goal was to help her coworkers focus on their job and not having to constantly watch their backs.

TSA eventually fired her coworker, and now they were targeting her too.

In the beginning, there was no light

The Bush administration was never a friend of unions. They didn’t believe federal workers should be entitled to workplace rights. So, when they had to create a new agency to take over airport security in response to the 9/11 terrorist attacks, it was out of the question that the TSA workforce would get a union.

“Republicans wanted to create the agency without union rights. We took up the fight to allow TSOs to organize,” said Winch, then national organizer who was part of the AFGE TSA campaign from the very beginning.

During those two months before Congress passed a bill creating TSA, AFGE worked hard to influence the outcome. We worked with friendly members of Congress to include measures granting collective bargaining rights to the TSA workforce. But the opposition to workers’ rights was so great that there were only two options – outright prohibition of collective bargaining or giving the TSA administrator sole discretion to decide the terms of employment of the screening workforce.

In November 2001, Congress passed the Aviation and Transportation Security Act, and President Bush signed it into law on Nov. 19. The law federalized the screening function, created TSA, and let the TSA administrator decide on what to do with its personnel policy.

After the bill became law, AFGE met with TSA officials on several occasions to persuade them to allow the workers to have a union and to bargain collectively. In the meantime, we had been visiting airports to gauge the interest of workers in joining the union.

At the Washington Dulles International Airport, Winch talked to the existing workers who expressed interest in joining the union. But the Bush administration didn’t want to hire the workers there. They assembled a group of about 40 TSA officers – the very first group of TSA officers who would later be called TSOs – that were put up at the Baltimore-Washington International Airport (BWI) but also traveled to help with the screening duties across the country.

“You’d think it’s an elite group and were treated really well, they were not,” Winch observed.

Their hotel bills, for example, did not get paid on time. TSA also gave all of them the same enter duty date. In what might have been a first win on working conditions at TSA, our union tried and got the agency to give these employees their correct job entry dates and thus seniority rights, which would later be included in our first contract with TSA.

A novel organizing model – an experiment

When it became clear that the TSO workforce would not be granted collective bargaining rights, AFGE decided to experiment with an alternative organizing framework called open-source unionism (OSU) championed by labor academics Richard Freeman and Joel Rogers, who argued for representing workers outside the scope of collective bargaining as a way to organize the workforce and pressure employers.

After all, as another labor academic Charles Heckscher pointed out, labor laws like workers compensation protection and Equal Employment Opportunity were geared towards individual workers, offering unions an opportunity to organize outside the scope of bargaining.

“As the AFGE Organizing Director at the time TSA was created in November 2001, I believed strongly that the union could not let the absence of a Wagner Act framework short circuit its ability to organize such a large group of federal workers,” said Sharon Pinnock, referring to the 1935 National Labor Relations Act that gave employees the right to join unions and bargain collectively. 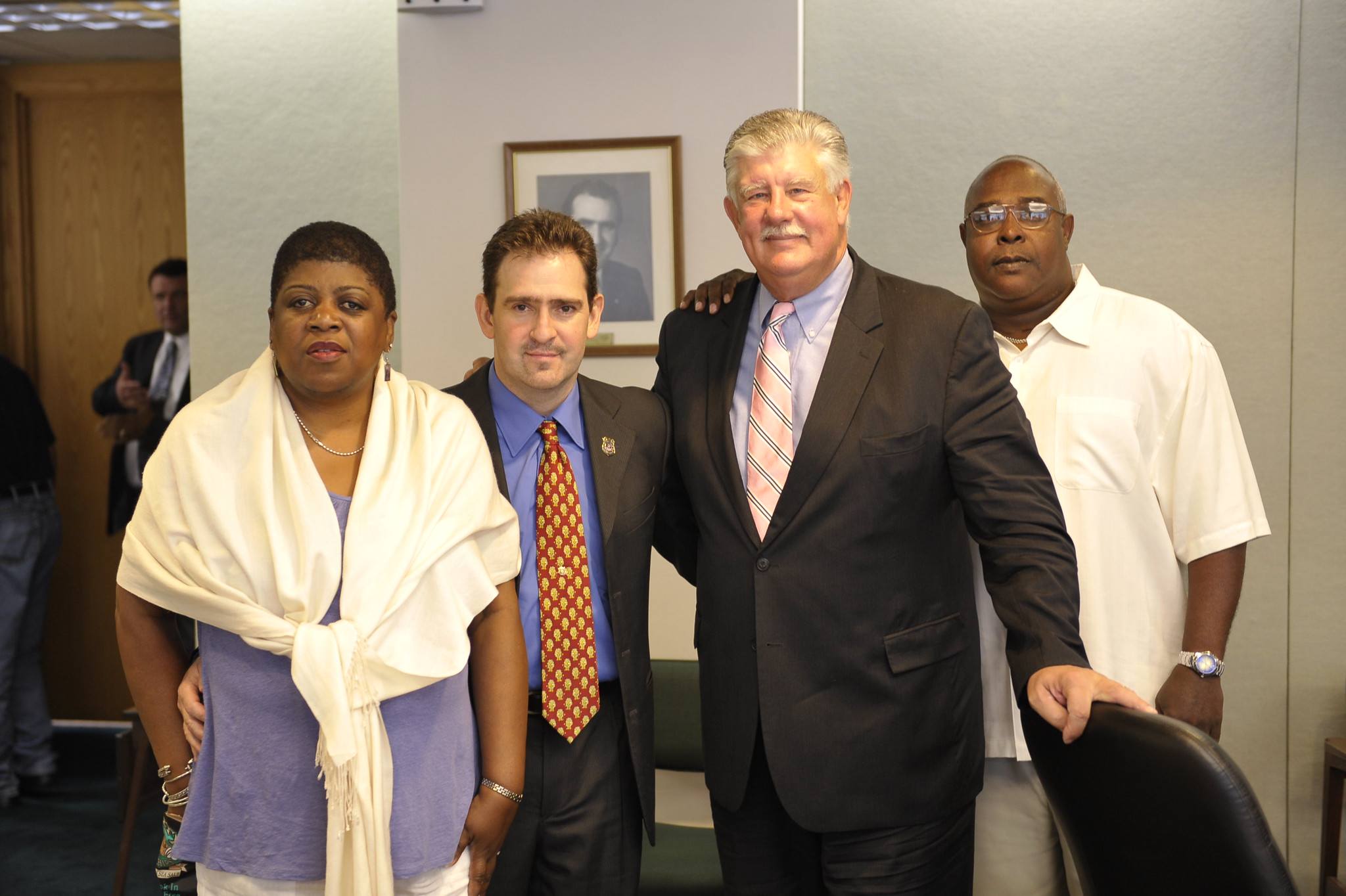 Pinnock explained in a paper [1] she wrote for The Journal of Labor and Society that, “I was familiar with the literature supporting the use of alternative organizing models and allowed it to inform my thinking about how an effective OSU campaign might be undertaken. As it developed, Bobby Harnage, who was the AFGE national president at the time, agreed that the union must make the effort to organize the TSA workforce and was willing to experiment with a novel approach to this end.”

So, in November 2002, AFGE started filing a series of petitions to represent TSOs at BWI, Chicago O’Hare, and Atlanta airports. The FLRA would later dismiss them all, saying we could not petition to represent individual airports. AFGE later changed our strategy to make it a nationwide unit.

A few months later, the Bush administration formalized its anti-worker stance at TSA. On Jan. 8, 2003, Under Secretary of Transportation for Security Admiral James Loy signed an order prohibiting collective bargaining by TSA screeners, claiming that union representation of the workers denies the agency the “flexibility” required to wage the war against terrorism.

We found Loy’s reasoning to be an insult to other federal workers and law enforcement officers already represented by AFGE and other unions, such as those at the Department of Defense, Border Patrol, FEMA, and the Bureau of Prisons.

Loy’s directive also endangered the American people who relied on TSOs to be fully focused and not distracted by workplace issues. AFGE’s telephones had been ringing off the hook as TSA employees called to report forced overtime, sexual harassment, delayed paychecks, the agency’s failure to provide protective equipment for baggage handlers searching for explosives, and other issues. Only under union protection would these workers have the assurances they needed in order to do the best job possible for the American people.

Loy’s directive “is a ruse if there ever was one,” said Bobby Harnage, Sr., AFGE’s president at the time. “Admiral Loy surely knows that the administration already has the flexibility to suspend collective bargaining during a true national emergency. Additionally, through the collective bargaining process itself, the admiral’s concern could be thoughtfully addressed. The Bush administration has shown once again that the war it cares about most is the one it is waging against the U.S. government workforce.”

AFGE vowed Loy’s order was by no means the last word.

After filing the lawsuit against TSA for refusing to allow TSOs to bargain collectively, AFGE on March 3, 2003 chartered our first TSA local – Local 1 – with AFGE President Harnage as the local’s first president. 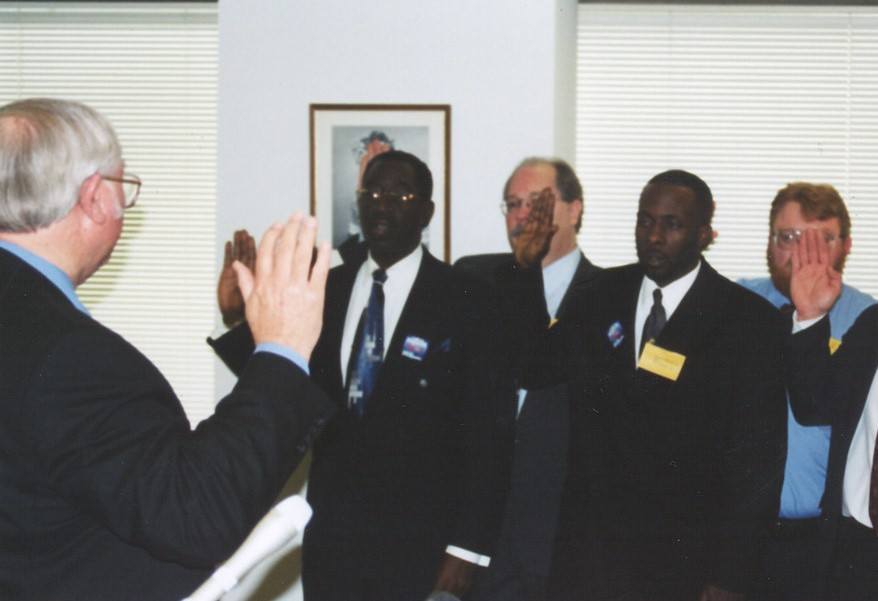 As membership climbed to 130 within three months, AFGE began fighting back local TSA managers’ efforts to thwart the union.

At this point, Kraynak had been increasingly involved in the union. At the first election of TSA’s Local 1 executive board, Kraynak was elected to be women’s coordinator. As soon as she was elected, TSA at Pittsburgh treated her differently. AFGE’s charter of Local 1 did make a difference in the atmosphere at her airport.

“When that happened, they changed their tune a little bit. When we had our TSA Local 1 and we had our executive board, it was all over the newspapers. It was a really big deal,” Kraynak recounted. “Management came up to me and asked what I needed and how they could help me. The whole atmosphere changed at that point because I had that national title, and they knew that I had AFGE behind me. They also knew that I could just pick up the phone and call USA Today or The Washington Post.”

Kraynak would later play a larger role in the union by helping build the AFGE TSA Council 100 and became its first president.

AFGE’s General Council Office also began laying the groundwork to establish minimum rights for TSOs that would shape how we represented the workers outside the collective bargaining framework.

Missed our 1st segment of the series?

Check it out here: