Going above and beyond the call of duty isn’t easy when your typical work shift exceeds 13 hours, but that’s exactly what Sgt. Jody Fiala excels at. So it should come as no surprise that Sgt. Fiala has been named Police Officer of the Year by the AFGE Law Enforcement Committee.

A member of AFGE Local 2010 for the past 14 years, Sgt. Fiala currently serves as a lead patrol officer at Naval Station Mayport in Jacksonville, Fla. He regularly travels to other commands and Department of Defense components to educate, train and mentor fellow officers in weapons handling, anti-terrorism strategies, and tactical response – all using his own leave.

Fiala developed an Active Shooter Awareness Program, which has trained more than 5,000 non-law enforcement personnel during the past few years on how to handle these high-risk situations. As Naval Station Mayport’s active shooter instructor, Fiala helped more than 20 commands on base develop their response plans and standard operating procedures for responding to an active shooter situation.

He leads Mayport’s Security Reaction Force, a 13-member team of military and civilian volunteers who learn how to respond to high-risk calls and plan security for major events such as visits by the Vice President. He’s also a member of many high-profile organizations, including the FBI Joint Terrorism Task Force, the Command Climate Assessment Team, the Mayport Partnership Council and Labor Management Team.

“I’m extremely honored. I’m nowhere near the best officer. The U.S. government has tons of phenomenal police officers that don’t get credit, so I’m extremely humbled,” Sgt. Fiala told AFGE. “It’s been an extreme honor to be trusted to do law enforcement especially for the military. I wish more people knew how many phenomenal police officers they have working for the government for very little pay for very little benefits.” 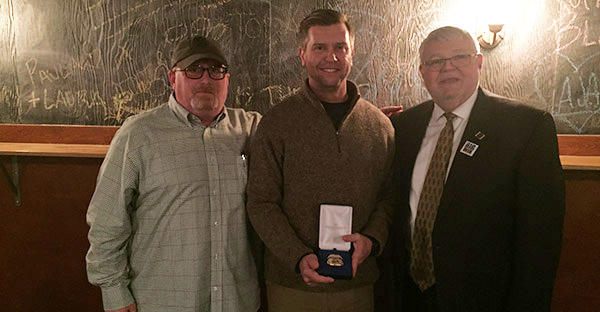 Fiala’s officers distinguish themselves as the best in the department and routinely respond to high-risk service calls and critical situations without incident, says Derek Pollock, vice president of AFGE Local 2010. For the past few months, Fiala has supervised 11 police officers and 10 military police personnel as watch commander.

“Sgt. Fiala is the most recognizable police sergeant in the department due to the massive amount of off-duty and extra assignments he performs for Mayport and other commands,” Pollock said.