Inside America's National Parks for their 100th Birthday

Americans love their national parks. The parks are places where families create memories, where people search for peace and inspiration, where the nation’s history comes to life. From the Statue of Liberty to Yellowstone, from Shenandoah to Yosemite, our national parks showcase America’s beauty, pride, and a strong sense of national identity.

To preserve our national parks for the enjoyment of generations to come, the National Park Service (NPS) was created 100 years ago on August 25, 1916, to protect the 40 national parks and monuments in existence and those yet to be established. Today, it includes 411 national parks and national monuments and welcomes about 300 million visitors every year.

AFGE is celebrating a century of the National Park Service by recognizing the 22,000 men and women who keep them running, many of whom are AFGE members. To kick off our National Parks’ series, we tagged along with a few of them to give you a glimpse of what’s it like to help preserve these historic sites while helping their fellow Americans create memories that last a lifetime.

As national parks are considered by many to be America’s best idea, what’s a better place to start the celebration than the birthplace of America: Philadelphia.

As the first capital of the United States, Philadelphia is a city full of history. Its Independence National Historical Park spans 55 acres on 20 city blocks and comprises much of our nation’s historical landmarks such as Independence Hall, the Liberty Bell, and Old City Hall. The park also tells the story of Philadelphia’s most famous citizen and much beloved founding father, Benjamin Franklin. It was featured in a Hollywood blockbuster National Treasure starring Nicholas Cage in 2004.

Independence Hall, where the Declaration of Independence and the Constitution were signed, has been designated a World Heritage Site by UNESCO since 1979. Last year, the organization crowned Philadelphia the U.S.’s first World Heritage City.

It’s not easy to run a national historical park of this size and significance, and it’s all possible because of the outstanding work of the 200 NPS employees AFGE proudly represents. 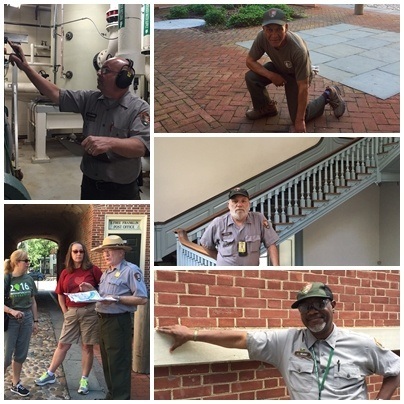 When the founding fathers gathered in Independence Hall in 1787 to draft the Constitution, they were bundled up in heavy clothing, stockings, frocks and wore traditional powdered white wigs – hardly a comfortable wardrobe for the 80-degree weather in July. Because of the extreme sensitivity of the proceedings, they also kept the shutters and doors tightly closed. Temperatures rose even further as heated debate occurred about what our government should or should not be chartered to do. If only Washington, Hamilton and Madison had their very own David Fitzpatrick.

Today, David, a chiller plant operator, makes sure that all 25 buildings in the park have the right temperatures and humidity levels. But you won’t see him in action. His office is tucked away in the basement of a federal building, far away from the historical sites. He controls the whole park from his computer screen. With many buildings as old as the country itself, it’s crucial that the temperature and humidity levels are right. Dry air in winter, for example, can cause damage to these old structures. Part of David’s job is to add humidity to the buildings so the old wood won’t dry out.

“I make repairs and adjustments to the air temperature and you wouldn't even know it,” He told us. David is also president of AFGE Local 2058 and AFGE’s newest council, the NPS council.

David operates three huge chillers standing in the middle of the room. In summer, the chillers keep the buildings cool at a pleasant 73 degrees. But they make loud noises, one of the main reasons the chiller plant needs to be far from the historical sites and visitors. These air handlers work well most of the time, but if one breaks down, Jim Grant, building maintenance mechanic, is one of the mechanics who fixes it. Jim also fixes heating and water. He’s one of the maintenance mechanics who respond to emergencies, meaning if there’s a problem at 3 a.m., they call him to have it fixed.

When you walk around Independence Hall and look up, you’ll see security cameras and fire alarms all over the building. They are operated and monitored by the park’s electronic mechanic Scott Drake. Scott’s job is to make sure all the alarms work and the building is safe and secure. His day starts at 7 a.m., a couple hours before the building is open. He checks the alarms and fixes whatever he needs to fix to get Independence Hall and other buildings ready before the first visitor walks in.

Stepping outside Independence Hall and you’ll be standing on red bricks kept in good condition by George Young. George’s job is to make sure the grounds and walls of this historical building are safe and secure for visitors.

See the guy in olive green pants, a khaki shirt, and a ranger hat talking to visitors? That’s Ed Welch. As a park ranger, he gives visitors historical tours of the park and helps them navigate it. Ed starts off his day with a morning briefing to receive that day’s assignments. He could be at the Liberty Bell first thing in the morning and Independence Hall next.

Ed, George, Scott, Jim, and David love their jobs. They are proud to help preserve the park for generations to come.

The Independence National Historical Park is the heart and soul of Philadelphia, the nation’s first and only World Heritage City, yet many of these historical buildings are crumbling. Independence Hall, for example, has water leaks that result in chipped paint on the walls, very visible to visitors. Old City Hall’s roof is rotten. The ornate First Bank of America is not even open to the public. It now serves as a storage and is surrounded by overgrown grass.

To reiterate how understaffed the park is, Scott was attending his retirement training two weeks ago and had to be pulled from that training because he’s the only person who can fix the fire alarm that went off at the east wing of Independence Hall. While waiting for him to come over, they had to shut down the east wing and usher visitors out. He fields phone calls at night to help troubleshoot and has been called in to work while on vacation.

NPS’s staffing structure is problematic as well. It relies heavily on unpaid volunteers, without whom employees couldn’t take vacation because the agency is so severely understaffed.

“There’s a problem with that picture,” David said.

To make workers’ voice stronger, six AFGE NPS locals in seven states in the northeast recently banded together to establish a council – Council 270 with David as its first president and Adam as secretary treasurer.

“National parks belong to every American. They are our gifts to the next generation. We have to do everything in our power to preserve and protect them,” he added.