What Millennials Think About the Labor Movement May Surprise You

Politicians and media have written the labor movement’s obituary countless times over the years. But according to a new survey from the Pew Research Center, it appears rumors of labor’s demise have been greatly exaggerated.

The survey found that labor unions are seen more positively today than they were five years ago: 45% say unions have a positive impact on the country, up from 32% in 2010.

Younger people have a far more positive view of labor unions than their older peers, with 57% of millennials agreeing unions have a positive impact – a figure that has increased dramatically during the past 5 years. Millennials – typically defined as those born since the early 1980s – are more than twice as likely as some of their older peers to value union solidarity. 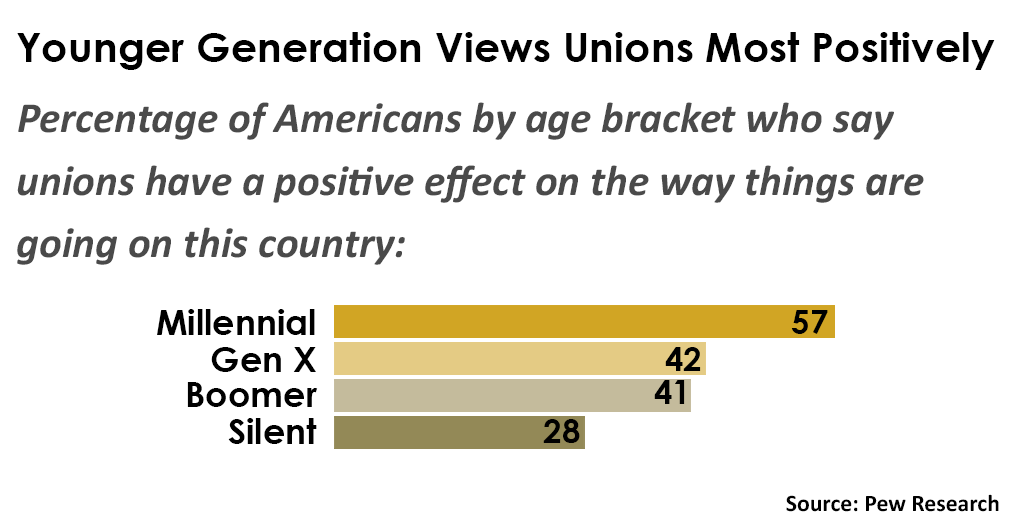 The new research makes sense, as millennials continue to gain their footing after the 2007 recession caused them to “defer decisions about home and car purchases and also marriage,” notes a report written by the Bureau of Labor Statistics.

Millennials face real challenges in the labor market and must also deal with the crippling burden of student debt.

As the after-effects of the recession continue to this day, the decisions millennials make now can reverberate for years to come

This strong support among younger people is translating into organizing victories in many emerging industries. Employees at online news publications Gawker, VICE and Salon voted to join the Writers Guild of the East last year, while employees at Huffington Post currently are seeking union recognition from management. Meanwhile, drivers for smartphone-based taxi services such as Uber and Lyft are pushing for unionization in Los Angeles,Seattle and other cities.

AFGE several years ago recognized the importance of growing the union among the younger generation by launching the Y.O.U.N.G. program, or Young Organizing Unionists for the Next Generation. Y.O.U.N.G. is mobilizing young union members to become leaders and activists for social change within AFGE and the labor movement.

Join the Facebook Young Page and check out what AFGE is doing with the Y.O.U.N.G. program.