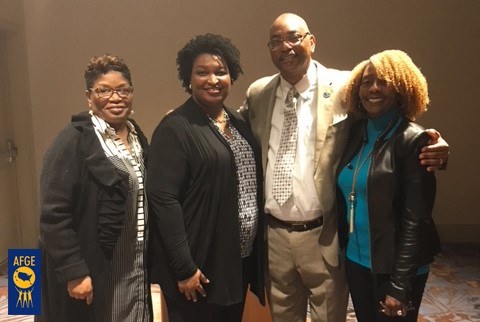 “Stacey Abrams has advocated for Georgia’s working people as a state representative and will fight to protect and expand all workers’ rights and benefits as Georgia’s next governor,” Kelley said.

More than 71,000 federal employees live in Georgia – caring for our veterans, supporting our military, researching cures for deadly diseases, and keeping dangerous criminals off our streets.

“Stacey Abrams understands federal employees are a vital part of Georgia’s workforce and will fight to protect the right of all public-sector employees to form a union and bargain collectively for better working conditions,” Kelley said.

“She also sees how shutting down the federal government disrupts so many lives and will fight to keep our government opening and functioning for all of Georgia’s citizens.”

AFGE is the largest federal employee union in the country, representing 700,000 federal and D.C. government workers in all functions of government. District 5 is the largest of AFGE’s 12 districts, with nearly 51,000 dues-paying members in Alabama, Florida, Georgia, South Carolina, Tennessee, Puerto Rico, and the U.S. Virgin Islands.