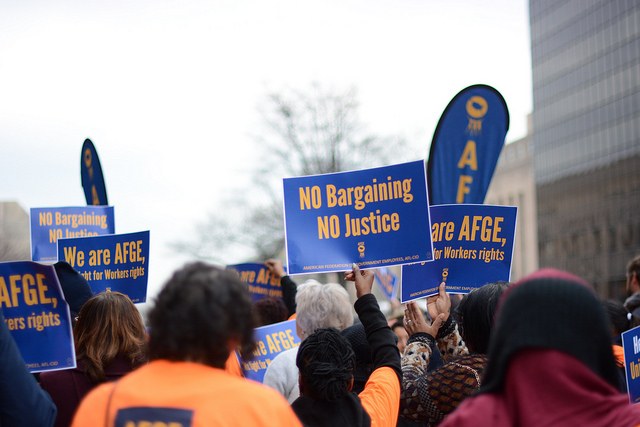 WASHINGTON – This year the Trump Administration has launched several different attempts to dismantle unions and gut public servants’ rights and protections in the workplace. From bad faith negotiations with workers at the Centers for Disease Control, to imposing an illegal “collective bargaining agreement” at the Department of Education, all the way to the illegal May 25th executive orders; the message has been clear. Workers’ rights and the law don’t matter.

Now, the administration is adding to the growing list by violating ground rules and negotiating in bad faith with the union representing workers at the National Institutes of Health (NIH).

After more than a year of the union bargaining in good faith with NIH, its parent agency – Health and Human Services (HHS) – has violated established ground rules with the American Federation of Government Employees (AFGE) so the agency can silence workers by eliminating the rights and union protections for more than 700 NIH employees.

“What is happening right now to the women and men who serve the American public at our country’s foremost medical research agency is unconscionable,” said AFGE Local 2419 President Kimberly Goodwin. “We have been working with NIH for more than a year – not including the time it took to establish ground rules. And now, they want to rescind everything we’ve already agreed to, jeopardizing the livelihoods of hundreds of us who just want to help save lives.”

AFGE Local 2419 – which represents public servants in Maryland, North Carolina, and Montana – was told this summer by negotiators from HHS that the agency would be withdrawing every agreement reached by the parties over the last year. The agency also said they are eliminating the majority of the previously agreed to collective bargaining agreement – all in direct violation of the established ground rules.

“This administration feels it’s above the law. The ground rules clearly state that during negotiations, neither party can pull out of a previous agreement without the other party’s consent,” said Goodwin. “But, HHS feels like they can walk away from every single thing we’ve already bargained over and agreed to, so they can eliminate our rights and protections in the workplace.”

“They call it ‘streamlining,’ but we know what it is – union busting,” Goodwin added.

According to Goodwin, the new proposals essentially eliminate the grievance process by excluding 44 existing contract violations, and goes so far as to eliminate articles on safety and health, annual time, sick leave, overtime, and even attire and appearance.

“Quite frankly, it’s absurd what they’re doing,” said Goodwin. “There is a process that exists for a reason. And we’ve followed the rules. But, now we’re being told none of it matters and the agency doesn’t care. They’ve even said they want this to go to impasse. They’re trying to get rid of the union and the protections we offer to workers here just like they have done in other agencies and are actively trying to do in even more.”

AFGE Local 2419 has already filed a grievance against HHS over the violation of the ground rules and refusal to bargain over the proposed articles. But, while the grievance process plays out, the union is still required to meet with the agency under the established ground rules.

“We know this administration doesn’t care about working people, but we’d hope they care about the millions of lives saved by what we do,” said Goodwin. “We’ve endeavored to get a fair collective bargaining agreement in place. We just want to continue that process, and not be railroaded by administration officials who don’t like us. We hope the American people take notice and call their member of Congress to put pressure on the agency to stop this heinous proposal from going one step further before it’s too late.”