Group says S. 2372 ‘does nothing to help the VA fulfill its mission to veterans’ 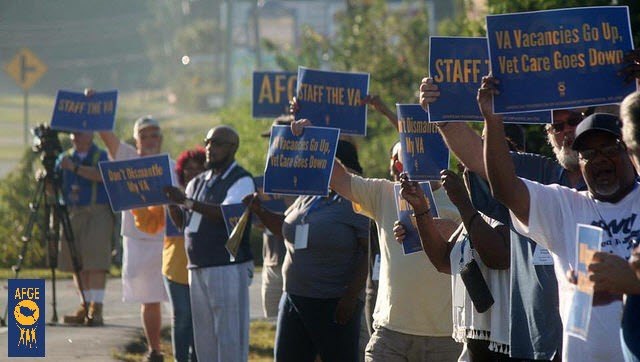 WASHINGTON – Yesterday, 17 labor organizations cosigned a letter that was sent to every Senate office urging Senators to vote against S. 2372 – the VA MISSION Act. The bill passed in the House last week and will be voted on in the Senate sometime in the next 24 hours.

Leading labor organizations and the unions that represent workers at the VA – including the American Federation of Government Employees which represents 260,000 frontline workers at the agency –  say if the VA MISSION Act is passed, it could lead to the total privatization of the Department of Veterans Affairs.

“We have no choice but to stand together with frontline employees at the Department of Veterans Affairs (VA) and oppose this legislation,” the groups write, adding, “Too much is at stake for veterans, their families and everyone who benefits from the VA’s extraordinary accomplishments to succumb to political pressures to hurriedly pass potentially damaging changes with many unknown consequences.”

In the letter, the groups highlighted the “troubling” privatization portions of the VA MISSION Act, saying S. 2372 “outsources primary care to the private sector, authorizes, the outsourcing of entire service lines, and fails to address the chronic and prolonged issue of understaffing that is currently plaguing the VA.” They go on to say that the “BRAC Process to deplete the VA medical services account without restrictions,” is “especially troubling given the enormous cost overruns associated with military BRACs.”

To see the letter cosigned by the 17 labor organizations and the Legislative Alert sent today by the AFL-CIO on the VA MISSION Act, please visit www.afge.org/s2372