Largest Federal Union Demands Immediate End to Shutdown, Says This Is About People, Not Politics

800,000 federal workers, and the country they serve, deserve an immediate appropriations solution

“As the Senate votes today, I am calling on each senator to remember that this is about restoring government services to our citizens and getting federal employees back to work and paid for the work they are doing. It’s about pork inspection, not pork barrel; people, not politics. In the last 34 days, I’ve seen single mothers break down into tears because they don’t know how they are going to feed their families, workers delayed from their dreams of buying their first homes, law enforcement officers forced to choose between their medical bills or their mortgages. 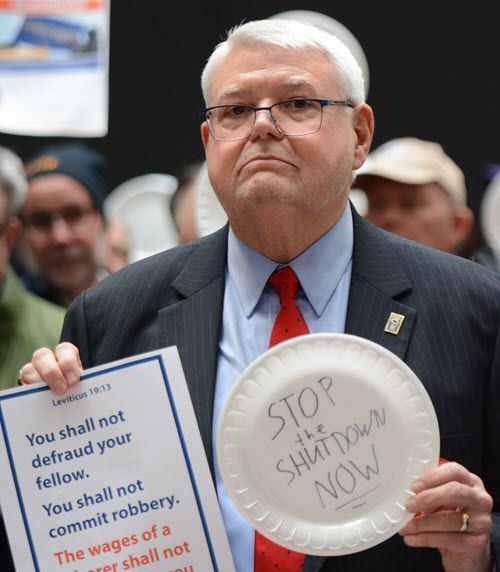 “Allowing the suffering of 800,000 federal employees to persist while an immediate solution is readily available is wrong and unacceptable. It is time for the shutdown to end and for Congress to fund the government for the remainder of the fiscal year. Every day without current funding is a day that Congress should be working on funding bills for next year. The government is designed to function with continuity of funding and services for the American public.

“Our country has been led to believe that this shutdown is about national security; this is untrue. As I speak with our AFGE members across the country, the real security risk I see is locking federal employees out of their jobs, forcing workers to work without pay, and depriving critical services to millions. The pressure, stress, and anxiety that our government employees have been hurled into is despicable. The shutdown is affecting the law enforcement officers who protect our communities from some of society’s most dangerous people. It’s adding stress to the low-paid TSA officers who are keeping the flying public safe while working without pay. Cherry picking agency by agency which ones are shuttered and which are being supported by unpaid employees is fracturing critical government infrastructure.

“It is apparent that the longer this shutdown persists, we are crippling our national security, compromising our country’s most at-risk citizens, and stunting our democracy’s future. This lockout is killing rural communities across America that rely on government employees and their families spending in the local community, and it’s killing small business and local farms that depend on federal loans and other assistance – help that our tax dollars have already paid for but is being held hostage due to the shutdown.

“Enough is enough! We need an immediate resolution to this stalemate before this ongoing lockout of government workers permanently maims the future sustainability of our government and our democracy. Our country deserves a vote that puts workers before politics.”