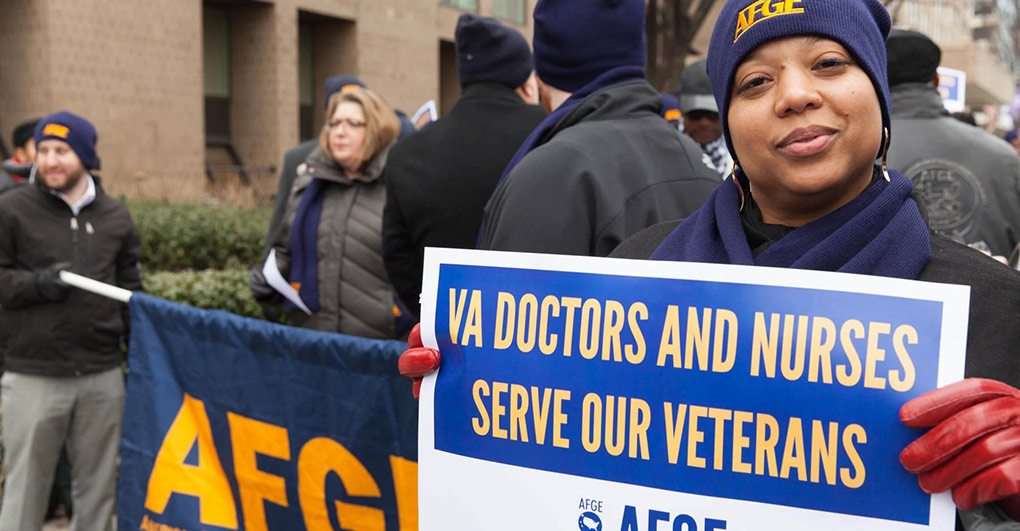 AFGE touts findings as proof that Congress should save the VA, not dismantle it

The survey of 800 veterans showed overwhelming opposition to privatizing Veterans Affairs hospital programs and services, regardless of age, political party or military branch. Overall, 64% of veterans oppose privatization, while 54% strongly oppose it.

Eight in 10 veterans believe they should not have to rely on vouchers that may not cover all of their health care needs in the private sector. Rather than privatizing their health care, veterans said the VA system should be strengthened by hiring more doctors and nurses.

There are currently about 41,500 vacant health care positions across the VA.

When it comes to the issue of accountability, the poll clearly shows that veterans believe for-profit hospitals are more interested in making profits than caring for Americans veterans.

“Lawmakers should think twice before supporting legislation that would outsource the VA to for-profit hospitals and undermine our nation’s promise to care for all of those who have served our country,” Cox said.

Veterans gave the VA high marks for the care they currently receive: 65% say the VA hospitals in their area have qualified doctors and nurses, 58% say the VA delivers good quality care, and 65% say the VA cares about veterans and their health care.

Veterans see two major areas for improvement in the current VA system: 48% say it takes too long to get treated at their local VA hospital, while just 37% say the VA has honest and transparent leadership.

To address the problems, veterans said their number one solution would be to hire more doctors (65% agree), while their number 2 solution is to hire more nurses (49%). Only 28% said the VA should be run more like a for-profit private hospital.

“Veterans know that they get specialized care and attention at the VA that they wouldn’t get anywhere else,” AFGE National VA Council President Alma Lee said. “What they want is for the VA to hire more doctors and nurses so they can keep getting the quality medical care they deserve and expect.”

The bipartisan poll was conducted last month by the Democrat-leaning Lake Research Partners and Republican-leaning Chesapeake Beach Consulting. More than a third of veterans polled identified as Republicans, while one-fourth identified as Democrats and 30% identified as Independents.