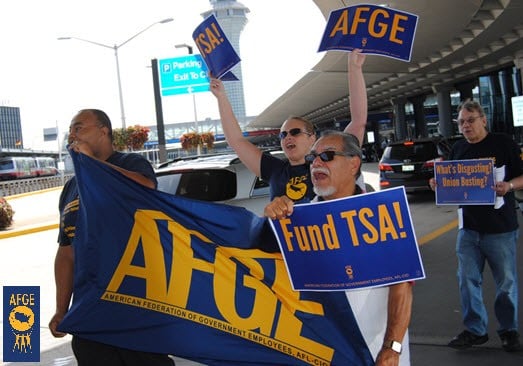 WASHINGTON – Budget cuts being proposed by the Trump administration will make America less secure and endanger the lives of the public and our public servants, the head of the largest federal employee union said today.

“These budget cuts will make a difficult job even harder for the women and men who protect our skies, patrol our waters, and help us prepare for and respond to emergencies,” American Federation of Government Employees National President J. David Cox Sr. said.

“President Trump promised to ‘make American safe again,’ but the drastic budget cuts he’s proposing will do just the opposite,” Cox said. “You don’t improve security by slashing budgets for programs that prevent terrorists from hijacking airplanes, keep illegal narcotics off our streets, and counter violent extremists in our neighborhoods.”

TSA’s budget would be cut by 11 percent, or $500 million. This includes a $65 million cut in behavioral detection officers, who provide an additional layer of security by monitoring airports for suspicious behavior, and a $55 million cut in local law enforcement grants to airports, which help protect the public and TSA employees by funding local police patrols around TSA checkpoints.

The Trump administration is proposing to slash TSA’s operating budget even as it forces the public to pay more for air travel. The security ticket fee charged by airline passengers would increase by $1 to $6.60 for each one-way flight, which would generate $470 million in additional revenue for DHS.