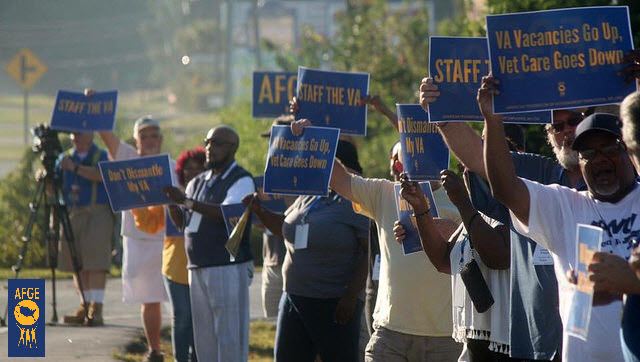 WASHINGTON – The AFL-CIO is pledging to work with the American Federation of Government Employees to fight efforts to privatize veterans’ health care and to restore due process rights for VA workers.

On Tuesday, delegates to AFL-CIO’s quadrennial convention in St. Louis adopted two resolutions submitted by AFGE in support of workers at the Department of Veterans Affairs.

The AFL-CIO resolved to oppose the privatization of veterans’ health care services and to help AFGE restore due process rights for VA employees that have been weakened by Congress.

“Ever since the waitlist scandal at the Phoenix VA, it’s been open season on VA employees,” AFGE National President J. David Cox Sr. said in introducing the privatization resolution for adoption.

“Very few people know that the scandal was brought to light by AFGE bargaining unit employees – whistleblowers – who knew that their bosses were manipulating the data in order to qualify for big bonuses,” Cox said. “Yet that scandal has been used by politicians of both parties to justify not only privatization, but also the weakening of our civil service protections and collective bargaining rights.”

The AFL-CIO’s vote came the same day that the House Veterans’ Affairs Committee held a hearing to consider legislation opposed by AFGE that would make the private-sector Choice program permanent, which would further starve the VA of needed resources and lead to more privatization of veterans’ health care services.

“This is a deliberate strategy: Establish the basics of a privatization plan – they call it Choice – and they keep throwing more and more money at it and encourage veterans to use it instead of the VA,” Cox said in his AFL-CIO address. “At the same time, they starve the VA of staff and other resources in order to make it fail. And of course, when the VA fails, the VA workers’ union disappears as well. It’s a story we all know too well.

“Then they have what they want: A broken system that has lost public support, a system with lots of valuable real estate they can sell off, and a privatization infrastructure that sends all the patients whose treatment is profitable to the private sector, with a skeletal VA left to care for the sickest that the private sector doesn’t want.

“Brothers and sisters, we need your help in the fight to retain our beloved VA health care system.”

AFGE is an affiliate with the AFL-CIO, the umbrella labor federation representing 12.5 million working people nationwide. AFGE represents 250,000 employees across the VA.