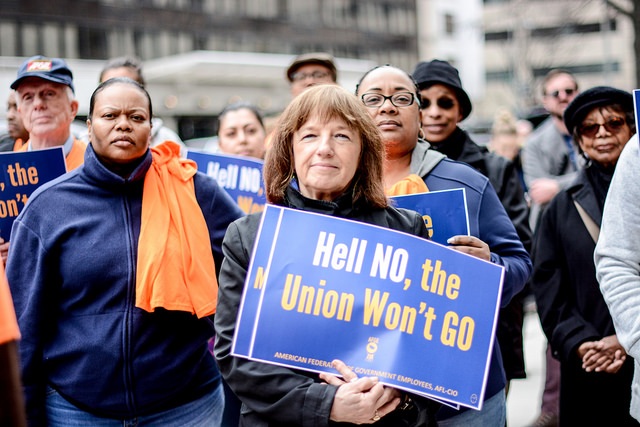 “This president seems to think he is above the law, and we are not going to stand by while he tries to shred workers’ rights,” AFGE said. “This is a democracy, not a dictatorship. No president should be able to undo a law he doesn’t like through administrative fiat.”

On Friday, May 25, President Trump signed executive orders that chip away at due process and collective bargaining rights for federal employees; a third executive order, which impedes employee representation at the job site, is the focus of the lawsuit.

AFGE filed the lawsuit May 30 in U.S. District Court for the District of Columbia. The lawsuit challenges the executive order as violating the right to freedom of association guaranteed by the First Amendment, and as exceeding the president’s authority under the Constitution of the United States.

“Congress passed these laws to guarantee workers a collective voice in resolving workplace issues and improving the services they deliver to the public every day – whether it’s caring for veterans, ensuring our air and water are safe, preventing illegal weapons and drugs from crossing our borders, or helping communities recover from hurricanes and other disasters,” AFGE said.

“We will not stand by and let this administration willfully violate the Constitution to score political points.”