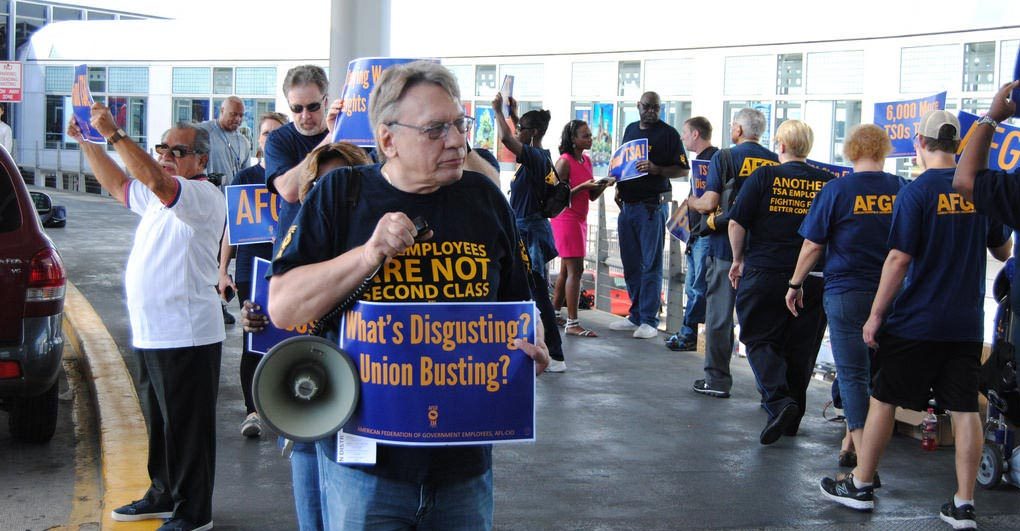 WASHINGTON – President Trump is attempting to silence the voice of veterans, law enforcement officers, and other frontline federal workers through a series of executive orders intended to strip federal employees of their decades-old right to representation at the worksite, the American Federation of Government Employees said today.

“This is more than union busting – it’s democracy busting,” AFGE National President J. David Cox Sr. said. “These executive orders are a direct assault on the legal rights and protections that Congress has specifically guaranteed to the 2 million public-sector employees across the country who work for the federal government.”

For more information go to www.afge.org/FightBack

“Our government is built on a system of checks and balances to prevent any one person from having too much influence. President Trump’s executive orders will undo all of that. This administration seems hellbent on replacing a civil service that works for all taxpayers with a political service that serves at its whim.”

“Federal employees swear an oath to serve this country. The American people rightly expect that federal employees go to work every day and do the jobs they were hired to do – whether it’s ensuring our food is safe to eat, caring for veterans who were injured while serving their country, preventing illegal weapons and drugs from crossing our borders, or helping communities recover from hurricanes and other disasters.”

“President Trump’s executive orders do nothing to help federal workers do their jobs better. In fact, they do the opposite by depriving workers of their rights to address and resolve workplace issues such as sexual harassment, racial discrimination, retaliation against whistleblowers, improving workplace health and safety, enforcing reasonable accommodations for workers with disabilities, and so much more.”

“These executive orders strip agencies of their right to bargain terms and conditions of employment and replace it with a politically charged scheme to fire employees without due process,” Cox said.

AFGE representatives have used official time in myriad ways that benefit taxpayers, including to:

“All federal employees, whether they belong to a union or not, are guaranteed the right to fair representation. Employees who volunteer to serve as union representatives use official time to carry out those representational activities,” Cox said.

“It’s a policy that has saved taxpayers in the long run because it helps resolve isolated conflicts that arise in the workplace before they become costly, agency-wide problems. And contrary to some reports, official time is never used to conduct union-specific business, solicit members, hold internal union meetings, elect union officers, or engage in partisan political activities.”

“By preventing problem solving, these executive orders will create inefficiencies and hinder the ability of dedicated federal employees to effectively deliver services to the American public.”