AFGE welcomes Phil Glover, Dan Doyle, and Gregg James as new National Vice Presidents for District 3, 4, and 8 respectively. Glover, Doyle, and James were elected in May replacing retired NVPs Keith Hill, Joe Flynn, and Jane Nygaard. Together, the new NVPs bring with them decades of experience that will steer AFGE forward to become Big Enough to Win.

Phil Glover, an Army veteran, has served AFGE for more than 25 years in different capacities. His leadership position with AFGE started in 1991 when he became vice president of Bureau of Prisons Local 3951. Between 1991 and 2014, he served as local president, Council of Prison Locals regional vice president, council president, council’s national legislative coordinator, and regional vice president (for the second time). He retired from BOP in 2014 before joining the national office as a National Organizer assigned to District 3 until his election to NVP.

But the union wouldn’t have benefited from his skills and talents if a shop steward hadn’t asked him to join AFGE back when he first started working for BOP at a facility in Loretto, Pennsylvania. In fact, he wouldn’t have known it was a unionized worksite at all.

Asking people to join is extremely important, and that’s what he plans to do. As an NVP, his focus would be growing membership in District 3 from about 50% membership now to at least 70%. He wants to work with District 3 locals on organizing and representation strategy. He also wants to create a much stronger legislative and political program in the district.

“I appreciate the locals expressing their confidence in me to do the job especially right now, there’s a lot of pressure,” he said. “The administration has put forward some proposals that are going to challenge the union and all the agencies. We have an EPA local in Philadelphia, their budget is looking at a 31% cut. Those things are going to be difficult to fight back on but we’re gonna have to find ways to do that.”

Glover has had many accomplishments under his belt, including increasing BOP nationwide membership from 56% to 73%, creating national policy teams for BOP, and winning a settlement of $130 million for BOP employees who had been cheated out of their pay for pre and post shift activities.

Besides being a voice for BOP officers, he was also a voice of federal employees at the state level. Glover served four years on the state AFL-CIO board – two years as an alternate and two years as a member. He also has been active in congressional campaigns in Johnstown, Pennsylvania.

Dan Doyle is a trade unionist at heart. His grandfather was a United Mine Worker of America member. His father was a steel worker at a large aluminum mill who was his union’s vice president during a large labor dispute where employees were locked out of their jobs for two years. It was a tough time.

“I know what union struggles were like," he said. "My roof over my head when I was growing up was because of my dad being a union member. Our community got through those tough times thanks to the solidarity shown by the AFL-CIO."

His own unionism started 27 years ago when he started working as a federal contract specialist at the National Energy Technology Laboratory (NETL) in Morgantown, West Virginia. He decided to join AFGE when he saw a union activist fighting for employee bonuses. “I saw the union standing up for us. Right away, this is something I want to join,” he recalled.

Dan got more involved in the union and became president of AFGE Local 1995 in 2003. But two years later, more than 700 NETL jobs in Morgantown, Pittsburgh, and Albany were under a threat of privatization. The Bush administration wanted to outsource important work by scientists, researchers, technicians, contract specialists, and others.

Doyle set out to work with his members of Congress with support from the AFGE national office, particularly former Legislative Director Beth Moten and Assistant Legislative Director John Threlkeld. Initially, West Virginia Senator Robert Byrd initially wanted to put language in a spending bill that would protect only NETL jobs in Morgantown, but Doyle insisted they included the other two sites.

“I wanted to protect Morgantown, Pittsburgh, and Albany. My brothers and sisters would have been thrown under the bus. I couldn’t live with that,” he said. When the bill became law, the federal jobs at the three sites were saved from the privatization effort. They were designated inherently governmental and couldn’t be privatized.

Dan has been vice president of the West Virginia AFL-CIO since 2005. When Jim Justice was elected West Virginia Governor last November, Dan was appointed to sit on the governor’s transition team’s Energy and Environment subcommittee to provide ideas on how to reinvigorate the state’s economy. Dan used this opportunity to explain what a great asset federal employees are to the state and the country.

As an NVP, Dan wants to invigorate AFGE with a sense that we’re in this fight together. An attack on any agency whether it is VA, TSA, BOP is an attack on all of us. He also wants to develop a culture of activism.

“Joining as a member is only the beginning. That’s just the first step,” he explains. “We have to make phone calls, we have to write letters, we have to support PAC and LEAF. We have to do all these things to succeed.”

Gregg James grew up living through strikes and picket lines. His grandfather worked in a lumber mill in Minnesota and was a union organizer for the AFL before the AFL and CIO came together. Back in the 40s and 50s, his grandfather would organize lumber camps, and the company would send in company thugs to intimidate them. His grandfather had lost his arm in a hunting accident so he had a hook. His union would send his grandpa, whom he called Grandpa Hooky, to these camps so when the company thugs came they wouldn’t mess with him. James’ father followed in Grandpa Hooky’s footsteps and became a union activist with U.S. Steel for the iron mining industry.

Like his father and grandfather, James had a first-hand experience of what workers can accomplish when they band together. After retiring from the Air Force where he spent 23 years, James continued his service to the country by joining the Defense Contract Management Agency (DCMA) in Van Nuys, California. Physically exhausted from driving 160 miles to and from work every single day for a year, James wanted to transfer from DCMA in California to its facility in Utah. But his supervisor kept blocking him. He contacted AFGE, and his union was able to help get him transferred. He joined AFGE the first day he got to Utah.

James became involved in AFGE and became president of AFGE Local 2118 in Utah in 2003 and Local 2265 in Minneapolis in 2012. After that, he became DCMA Council 170’s West Vice President and Executive Vice President. He was elected president of the Council in 2015.

As an NVP, he wants to educate the members and organize.

Retiring from AFGE But Not the Labor Movement 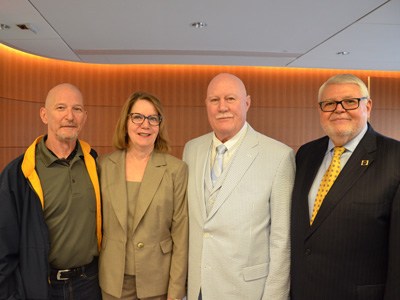 Even though Keith Hill, Joe Flynn, and Jane Nygaard no longer have their NVP titles, they don’t plan on leaving the labor movement any time soon.

“It’s been an honor to serve,” said Hill. “One of the greatest honors I’ve had. I was happy to do it and I wish everyone all the luck in the world. My work doesn’t end here. I will always be committed to the labor movement.”

And he will be missed.

Local President Cynthia Ennis will miss her day-to-day interactions with NVP Flynn but is confident he won’t be far.

“We have always fought for the rights of VA, SSA, and military employees,” said Ennis. “Joe showed us how to always fight the good fight. He’s always been on time and he’s been a wonderful NVP. I will miss him terribly but I don’t think he will ever leave the labor movement. It is part of him.”

And in true NVP Flynn style, he chose to leave us with a stanza. He said:

May those who love us, love us;

and those who don't love us,

May God turn their hearts;

and if He doesn't turn their hearts,

May he turn their ankles

so we will know them by their limping.

Farewell and may God bless our great union and each of you for all that you do.”

“NVP Nygaard freely shared her knowledge and experience. She provided leadership and mentoring to me and many others. But I’m most proud of how she displayed the hard work and accountability that we must have in the union movement. NVP Nygaard’s influence will continue for many years.”

“It has been a privilege serving as the National Vice President of District 8,” said Nygaard.

“Throughout the years, I could see firsthand the important work federal employees deliver to American citizens. AFGE and federal employees have some tough times ahead but I know working together we will survive these attacks,” said Nygaard. “I will leave you with an Irish saying: May you get all your wishes but one so you always have something to strive for! Slan [a traditional Irish goodbye] - farewell!”

Thank you NVPs Hill, Flynn, and Nygaard for your service. Farewell and see you soon!