Congress Has 10 Days to Pass a Budget

Congress temporarily reopened the government after shutting it down for three days. But the short-term funding measure signed into law keeps the government running only until Feb. 8. That means federal employees will face the uncertainty and disruption of a potential government shutdown all over again in two weeks.

AFGE does not support short-term continuing resolutions to fund the government. We need a long-term budget that will fund federal agencies through the rest of the fiscal year. Americans deserve to be able to access the programs and services that their tax dollars have funded, and federal employees deserve to be able to go to work without wondering when or if they will get paid.

Many people are asking why we even need a CR and why we can’t fund the government for the entire year. Here’s a quick explainer about the CR and when it becomes disruptive.

What is a CR and how it comes to be?

Even though the executive branch (the President and his cabinet) runs day-to-day operations of the federal government, the legislative branch (Congress) holds the power of the purse. That means Congress is responsible for passing annual legislation to fund the government. It decides how much each agency and program will receive each year. The President can propose a budget for each agency and program, but Congress has the final say over funding levels. Congress also usually has its own wish lists of things it wants to fund.

But if Congress fails to pass legislation to fund the government before a new fiscal year begins on Oct. 1, it needs to pass a short-term funding bill called a continuing resolution (CR) to keep the government funded at the current funding levels. Congress decides how long the CR is going to last.

What happens if Congress doesn’t pass a CR?

If they fail to pass a CR when the funding runs out, the government will shut down, just like it did for three days on Jan. 20-22.

So a CR is needed?

A CR should be an exception, not the norm. It becomes a problem when it’s used as a tool to jump from one self-inflicted crisis to another for years on end, just like Congress has been doing the past several years.

Why is CR a bad idea?

A CR is very disruptive and creates uncertainty and confusion. For example: 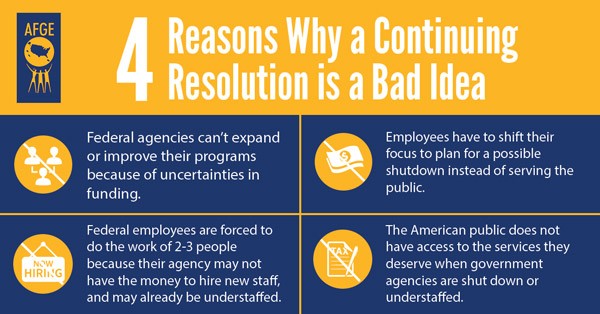 We can’t let them shutdown the government again

Tell your senators and representative to do their job and pass a long-term funding bill.

Call your lawmakers to pass a long-term funding bill that funds the government for the entire year.