March 31 is Equal Pay Day in the United States, a day dedicated to raising awareness of the gender pay gap in our nation.

Equal Pay Day was originated by the National Committee on Pay Equity (NCPE) in 1996 as a public awareness event to illustrate the wage gap between men and women. It was originally called “National Pay Inequity Awareness Day” and changed to Equal Pay Day in 1998. The United States Government passed provisions which addressed some of the major threats to equal pay through the Equal Pay Act of 1963.

Despite the Equal Pay Act, the gender pay gap persists. Women are typically paid just 80 cents for every dollar paid to men — and that number has barely budged in a decade. Although enforcement of the Equal Pay Act and other civil rights laws have helped to narrow the gender pay gap, these actions only cover segments of the American working population, and many important protections are not yet codified in law.

Why the gender pay gap persists

Below you will find an infographic from the American Association of University Women highlighting the pay gap per ethnicity. 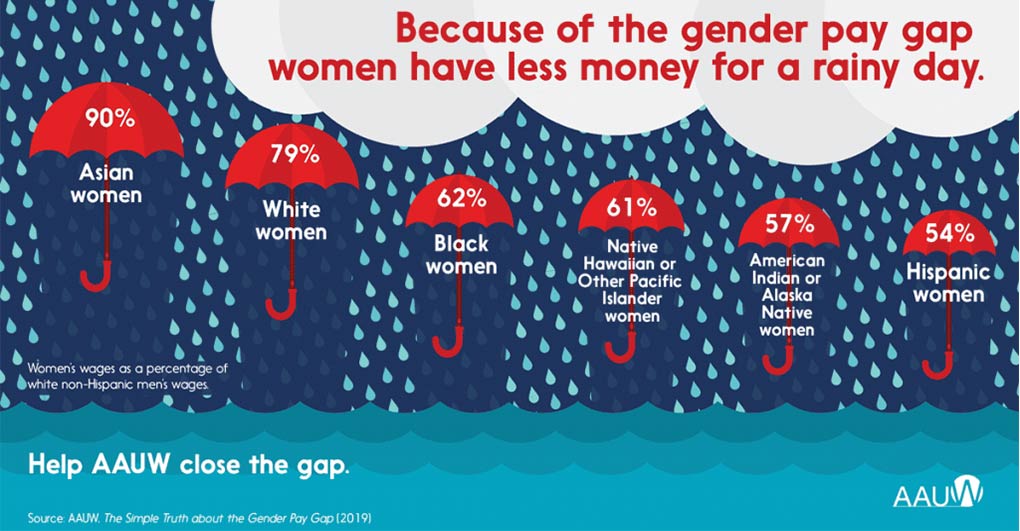 Source: The Simple Truth about the Gender Pay Gap (2020). Retrieved from https://www.aauw.org/research/the-simple-truth-about-the-gender-pay-gap/

The gender pay gap has a long-term effect and impacts a woman for her entire life. A 20-year old woman just starting full time, year-round work stands to lose $407,760 over a 40-year career compared to her male counterpart. And when her male counterpart retires at age 60 after 40 years of work, she would have to work 9 additional years – until age 69, past Social Security’s full retirement age – to close this lifetime wage gap.

Additionally, while Asian women have a smaller gap in lifetime earnings ($240,280) compared to other women of color, the gap remains substantial and many commonalities of Asian American and Pacific Islander (AAPI) women experience much larger wage gaps than is reflected in this overall figure for Asian women. For example, Nepalese women would lose $1.2 million and Thai women would lose $800,000 over a 40-year career compared to white, non-Hispanic men.

To end disproportionate pay in our nation, we must take a universal approach in how we open doors and provide better opportunities for women. First and foremost, we must secure paid family and medical leave for all and increase access to high quality, affordable child-care. We must also build ladders to better-paying jobs for women by removing existing barriers to entry in male-dominated fields and establishing fair scheduling practices that allow employees to meet their caregiving responsibilities and other obligations.

As we observe Equal Pay Day, we ask that we all find ways to advocate for our fellow sisters in the workplace and doing all that we can to ensure that they are receiving equal pay in our workplace. We at AFGE are proud to be allies to our female workers and advocate for them to have equal access, protections, and rights in the workplace.