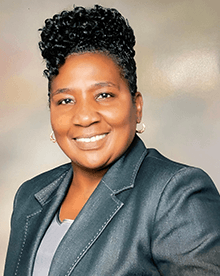 Cheryl Eliano is District 10 National Vice President of the American Federation of Government Employees, representing more than 40,0000 federal workers in Texas, New Mexico, Louisiana, Mississippi, and Panama. Eliano was first elected the position in May 2014 and she was re-elected to another three-year term in 2017.

Eliano’s mission for District 10 is to provide exceptional leadership and service at all levels and locations within Texas, New Mexico, Louisiana, Mississippi, and Panama.

Eliano began working for the federal government in 1979 as a commissary cashier in Munich, Germany. After a brief break in service, she returned to federal employment in the mid-80s and retired in 2014 to serve as national vice president.

Prior to being elected as the AFGE District 10 national vice president, Eliano served as president of AFGE Local 1920 for more than 10 years. She made history by becoming the first female elected to serve a full term as president of the local. She also was the first person to serve in three major functions of the local: secretary/treasurer, chief steward, and president.

Eliano scored numerous achievements during her time leading AFGE Local 1920, which represents Army civilians at Fort Hood, Texas. She helped organize and lead employee rallies to oppose the Department of Defense’s National Security Personnel System and fought the contracting out of civilian positions on base. She helped create a labor-management forum to address workplace issues proactively, helping to avoid costly and disruptive disciplinary actions, and also created a program to train employees and managers on workplace discrimination, employee assistance programs, and other personnel issues. She also was instrumental in implementing alternative work schedules for Fort Hood employees.

She sits on the executive boards of the Texas Workforce Commission, the Texas AFL-CIO, the Texas Gulf Coast Area Labor Federation, and the Texas Labor-Management Conference. She is a member of the Killeen Chamber of Commerce and currently serves as chair of the AFGE National Executive Council’s retiree committee. Eliano is also a licensed Evangelist Missionary at her church in Copperas Cove, Texas.

Eliano is the proud recipient of numerous awards honoring her commitment to the labor movement, including several leadership awards for maintaining labor-management partnerships at Fort Hood and several certificates of achievements for conducting labor-management training at Fort Hood. She also received a humanitarian award from the NAACP.

A native of Brooklyn, New York, Eliano received a nursing degree from the New York City College of New York. She also holds degrees and certifications from the University of Maryland, New Mexico State University, and Central Texas College of Killeen, Texas.

Eliano lives in Harker Heights, Texas, with her husband Perry. They have five children and three grandchildren.