WASHINGTON – The American Federation of Government Employees, the largest union representing federal and D.C. government workers, stands in solidarity with the 1,400 members of the Communications Workers of America who have gone on strike at Frontier Communications in West Virginia and Ashburn, Va. 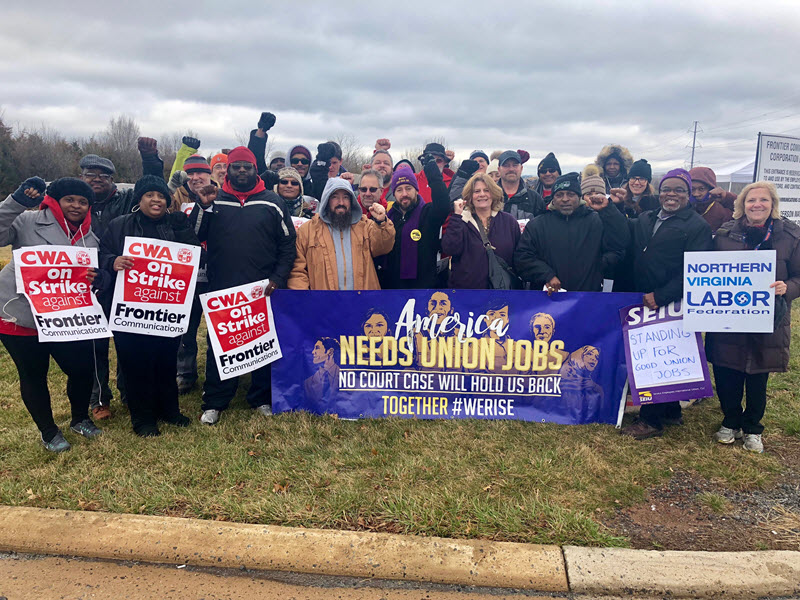 “These brave and dedicated union members are standing up for the work that they do and the services they provide to homes and businesses throughout West Virginia,” AFGE National President J. David Cox Sr. said. “AFGE stands in solidarity with our brothers and sisters at CWA and all workers who are demanding basic rights, protections, and job support.”

Since Frontier acquired Verizon’s landlines in West Virginia in 2010, the company has cut more than 500 middle-class jobs in the state. Informal complaints to the West Virginia Public Service Commission have risen 69 percent between 2014 and 2017.

“The CWA strikers are fighting to keep good-paying jobs in the state and for Frontier to start investing in West Virginia’s future,” said Dan Doyle, national vice president for AFGE’s 4th District, which includes West Virginia and Virginia. “Unfortunately, Frontier is not confronting the issue head on by negotiating with these hardworking employees. I encourage Frontier to come to the table in good faith to work out a deal, and preserve these good paying jobs that are so needed in our community.”

AFGE has more than 3,000 dues-paying members in West Virginia and nearly 14,000 in Virginia.