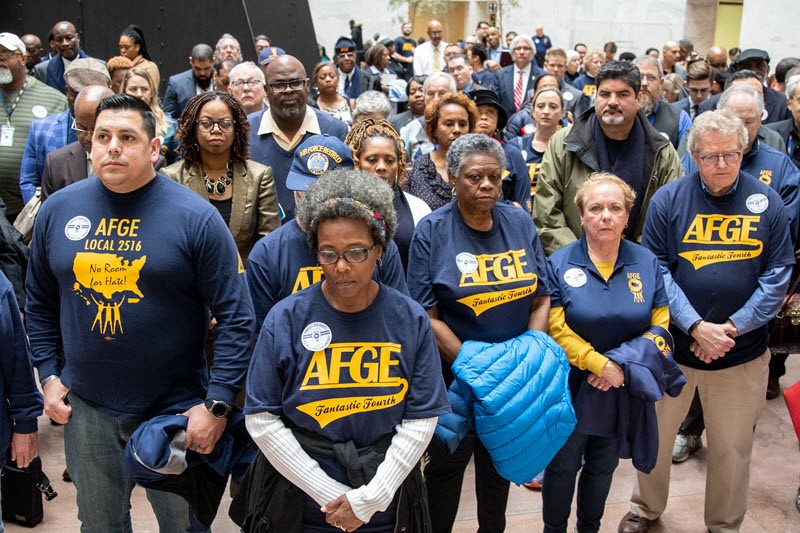 WASHINGTON – Nearly 700 labor activists representing 700,000 federal and D.C. government employees from across the country and overseas are calling on lawmakers to support the work they do on the public’s behalf and reject the White House’s efforts to undermine their jobs and eliminate their rights.

By hearing from and visiting members of Congress and congressional staff, holding a silent vigil on Capitol Hill, and mobilizing with fellow activists, union members attending the American Federation of Government Employees’ Legislative and Grassroots Mobilization Conference made it clear that they’re standing up for dignity, fairness, and respect on the job.

“The fact is this: For all of our victories last year, everything we’ve gained and everything we stand for remains at risk. This administration is still waging war on workers,” Kelley said.

Even as Kelley spoke, the White House was unleashing a new round of attacks on federal employees through a proposed fiscal 2021 budget that would impose nearly $82 billion in cuts to workers’ retirement savings through 2030, shift more costs for health care plans onto employees and retirees, further suppress workers’ wages by denying them a meaningful pay raise next year, and slash overall spending for non-defense programs.

“We’re up against a crowd that doesn’t believe in the public sector. So they’re not going after you personally only,” House Speaker Nancy Pelosi told a room full of union members during Monday’s conference. “They’re going after what you do. They want to privatize everything so they can make money off of it and then they don’t have to honor any commitments to diversity or fairness in the workplace.”

The administration has already stripped employees of their negotiated rights at the Environmental Protection Agency and the Department of Education, and it is attempting to prevent workers across the government from addressing unsafe workplaces, mismanagement, and other issues by evicting union officials from federal worksites under the guise of three executive orders issued by President Trump in May 2018. The Department of Veterans Affairs, for instance, ordered union representatives to vacate their offices as of Feb. 7.

Several hundred AFGE members held a vigil on Tuesday in the atrium of the Hart Senate Office Building, standing silent for 20 minutes to reflect the 20 months since the executive orders were issued.

As the conference was getting underway, attendees learned of the latest attack by this administration on workers’ collective bargaining rights – a Jan. 29 memo from President Trump delegating to the Secretary of Defense the authority to remove any or all DoD employees from the law guaranteeing their right to organize.

“The work done by AFGE members is important and you have earned the right to be treated with fairness, respect, and gratitude,” Collins said. “Please know that I will work with my colleagues from both sides of the aisle to protect the right of DoD civilian employees to engage in collective bargaining.”

Workers from the Environmental Protection Agency, who are in the midst of renewed contract negotiations with the administration’s political appointees, called for an EPA Workers’ Bill of Rights, raising signs during the conference that read, “Proud EPA Worker” and “#ProtectEPA” as they protested the administration’s hostile treatment of federal workers. Last month, EPA workers launched a campaign for a EPA Workers’ Bill of Rights to protect the EPA from ongoing attacks on its workers and its mission: to protect human health and the environment.

“EPA employees have dedicated their careers to the vital mission of protecting human health and the environment. But right now, we’re facing down an administration that is hell-bent on attacking civil servants and the work that they do,” said AFGE Council 238 President Gary Morton, speaking on behalf of 7,500 EPA workers nationwide. “We need a strong EPA now more than ever, and that means standing up for workers’ rights and scientific integrity. That’s why we’re calling for an EPA Workers’ Bill of Rights. It’s time to end the attacks on our rights as employees – and on science itself. We’ll keep raising our voices until we win.”