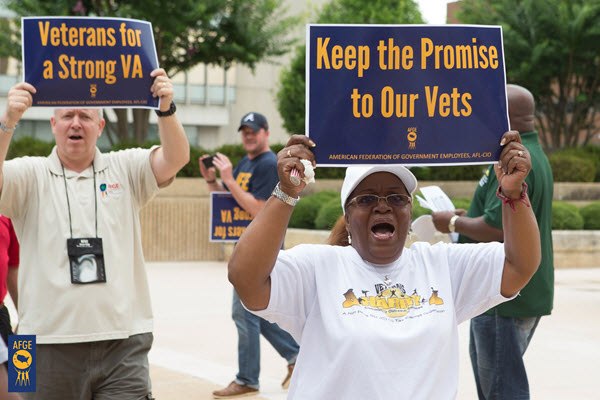 WASHINGTON – A Senate bill that would allow VA managers to fire rank-and-file workers based on scant evidence of wrongdoing and with little ability to appeal is a dangerous step toward politicizing the federal government’s career civil service, the head of the largest government employee union testified today.

“In AFGE’s view, this bill not only decreases accountability at the VA, it eviscerates the agency it is supposed to improve, and ensures that no employee ever gets a fair shake on any proposed adverse action,” said J. David Cox Sr., national president of the American Federation of Government Employees, in testimony before the Senate Veterans’ Affairs Committee.

President Cox, who was a registered nurse in the VA for 22 years, said the Senate bill will undercut the quality health care and services that veterans receive by eroding checks and balances that ensure hiring and firing decisions are based on merit.

“It is astounding that while there are reportedly up to 45,000 unfilled positions in VA health care, Congress has chosen to focus on attacking the rank and file employees who have made the choice to spend their careers caring for this cherished group,” Cox said. “Rather than addressing the critical need to fill thousands of urgently needed positions at VA in order to better serve veterans, this cynical, ideologically driven bill seeks to fire more VA personnel. Talk about misplaced priorities.”

The Senate bill, S 1094, would undercut many of the workplace rights and protections that are designed to protect government workers from disciplinary actions that are politically or personally motivated. It is a politically motivated response to rare but highly publicized issues of misconduct that mangers could address today with proper documentation and effort, Cox said.

“The VA can and should terminate people whose conduct or performance justifies termination. But it is absolutely not necessary to destroy the foundation of the civil service in order to allow them to do so.”

While the Senate bill only targets VA workers, its passage would open the door to eliminating due process rights for all federal employees and politicizing the civil service.

“The importance of maintaining a nonpartisan, apolitical civil service in an increasingly partisan environment cannot be overstated,” Cox said. “Whatever lack of public confidence in government exists today will be magnified a hundredfold if all civil servants become de facto political appointees, serving at the whim of supervisors. And that is exactly what this horrible piece of legislation will do.”