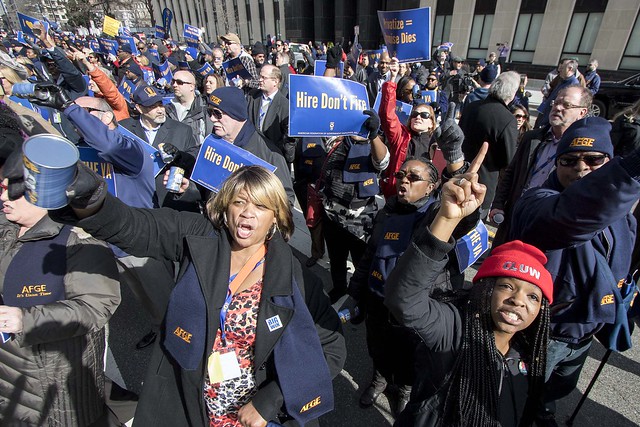 2018 has been a challenging year for government workers. But along the way, our union fought for and secured many wins that will help protect jobs, pay, and your rights at work.

As the year comes to a close, we’d like to celebrate our members’ and staff’s fighting spirit and revisit crucial moments that define who we are as unionists. Take a quick look at the highlights of our work defending democracy, our voice at work, and the middle class.

Nearly 80,000 federal employees working in high cost-of-living areas will receive higher locality pay in 2019, thanks to our union and allies’ push to close the pay gap between federal and non-federal sectors in those areas.

The Trump administration and lawmakers shut down the government twice over policy disputes in January and February. But we worked with Congress to ensure that the employees affected by the shutdown would receive backpay since it was not their fault that they were locked out of work. Now, we are facing the risk of a third shutdown this year. We’re urging all parties not to hold agency funding hostage to controversial policies unrelated to the budget.

President Trump in May issued three Executive Orders seeking to remove checks and balances in the federal civil service and open employees up to retaliation, discrimination, and unjust termination. Our union immediately sued the administration and won. On the day of the court hearing – the Red for Feds Day of Action – federal employees across the country held rallies to speak out against the EOs with a main protest in Washington, D.C. The fight, however, is far from over. The administration is appealing the court decision and several agencies are slow in complying with the court order. But one thing is clear: we will never stop fighting union busting.

We defeated repeated efforts by the Trump Administration and Congress to cut $160 billion in federal pay, retirement and health care. We also gained support from lawmakers to stop the administration’s proposed pay freeze in 2019. The Senate has approved a 1.9% pay adjustment for federal employees in 2019 to catch up with previous pay freezes and cuts. We will continue to work with members of Congress to pass this legislation.

There is no shortage of corporation-backed politicians who want to outsource federal jobs and hand over control of public assets to for-profit corporations. Thanks to our staff and activists, we were able to keep in place a government-wide A-76 moratorium and defeat a little-known bill that would have made it easier to outsource most federal jobs. We defeated efforts to outsource airport security in Orlando, Fla. The joint efforts between our union and a coalition of FAA unions also prevented privatization of the Air Traffic Control function of the FAA.

Our members gathered in Las Vegas to approve policies that will shape the future of our federation. We also re-elected J. David Cox Sr. as national president and elected Everett Kelley and Jeremy Lannan as national secretary-treasurer and national vice president for women and fair practices respectively.

Winning a three-year fight on per diem

Thanks to years of lobbying by our union and other worker allies, Congress passed the 2018 National Defense Authorization Act with a provision that overturned a 2014 Department of Defense policy that reduced per diem reimbursements for military and civilian workers who travel longer than 30 days at a time for work. This is a big victory for workers since being away from home for months at a time is hard enough without being forced to pay out-of-pocket for legitimate travel expenses that should be covered by the employer.

A large number of pro-union candidates won their elections and re-elections on Nov. 6, shifting the majority in the U.S. House of Representatives in the next Congress. This couldn’t have happened without union members and allies coming together to elect candidates who believe in workers’ rights, civil rights, and democracy.

After the Department of Education tried to silence workers by walking away from the bargaining table, our union filed an unfair labor practice charge and won. The FLRA found that the agency violated federal labor law by failing to bargain in good faith with our union and unilaterally imposing its own proposal on 3,900 federal employees.

Pushing back against efforts to silence workers

The Office of Special Counsel, which enforces the Hatch Act, has recently issued new guidance telling federal employees not to talk about “impeachment” or to use terms like “#resist” or “#resistance” while on duty or in the workplace until after Election Day in 2020.  After our union and allies raised concerns, OSC quickly issued an update clarifying its original guidance.

Our members and allies took to the streets to protest the closings of several SSA offices across the country. We will continue to fight the onslaught against Social Security, the most popular government program that keeps more than 22 million Americans out of poverty. SSA is not only attacking seniors but also its own employees. The agency recently walked away from the bargaining table and tried to implement Trump’s illegal executive orders that have been invalidated by the court.

Protecting those who protect the environment

The Environmental Protection Agency (EPA)’s mission is to protect the air we breathe, the water we drink, and the land we live on. When political appointees tried to undermine the EPA’s mission through cuts and give polluters a free reign to pollute, the American people and EPA employees sprang into action. Union members and allies gathered at rallies to draw attention to the administration’s effort to weaken our country’s environmental safeguards. The outpouring of public support for EPA employees in the form of A Love Letter to the EPA video submissions reflected the American people’s concerns about the administration’s pro-polluter policy.

Protecting veterans and those taking care of them

Trump launched several attacks against working people this year with a heavy emphasis on targeting the women and men who have dedicated their lives to caring for our nation’s veterans. In an unprecedented move, the administration took action against 430 union volunteers whose legal union rep duties was to protect workplace rights for 100,000 nurses, doctors, and other medical staff. Our union filed a lawsuit in response and will continue to fight any form of union busting.

After years of telling our side of the story, the House finally passed a bill that directs the Bureau of Prisons to provide a secure area in which BOP officers can store their personal firearms to ensure they make it home safely to their families. We pushed for the bill, the Lieutenant Osvaldo Albarati Correctional Officer Self-Protection Act, after Lieutenant Albarati was gunned down as a result of his work in prison. Our union is also working to address the administration’s decision to cut 6,000 jobs when federal prisons are severely understaffed and support staff like nurses and cafeteria workers are assigned to guard inmates.

Doing right by our federal firefighters

Thanks to years of hard work by our union activists, Congress passed and the president signed a bill that makes it possible for federal firefighters to receive compensation if they develop cancer as a result of their work. The Firefighter Cancer Registry Act requires the Centers for Disease Control and Prevention (CDC) to develop and maintain a voluntary registry of firefighters to collect history and occupational information that can be linked to existing data in state cancer registries.

The future of the labor movement depends upon the active participation of younger generations, and if the current trends in our union continue, our future is bright. Since the very first meeting of Y.O.U.N.G (Young Organizing Unionists for the Next Generation) AFGE in 2009, and the subsequent formation of national and local committees in 2012, we have made major inroads on the young membership organizing efforts and the strength of our program. As a result, all districts have seen their young membership grow. In 2009, we had 53,501 members who were under the age of 40. By the middle of 2018, the number rose to 62,971.