Our union’s 2019 legislative conference on Feb. 10-13 was a huge success. If you missed it, here are 10 of the best moments from this year’s gathering:

1. Members of Congress from both sides of the aisle vowed they would not let the government shut down again.

In a tremendous show of support for federal employees, several members of Congress attended the conference plenary sessions, panels, breakfast meetings, and other AFGE events to let AFGE members know they support federal employees’ work. They condemned the 35-day government shutdown and vowed that they would do everything in their power not to let it happen again. 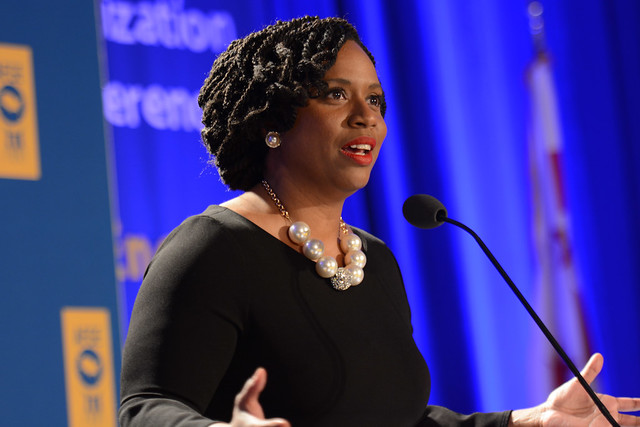 Senator Murkowski announced she would co-sponsor a bill that would give federal employees a 2.6% pay raise, becoming the first Republican to do so. The senator thanked AFGE members for the work they do on behalf of the American people. She condemned the so-called “partial” shutdown, which she said inflicted enormous harm on Alaska as 63% of the state’s land is managed by the federal government.

“As a state, we were impacted per capita more than any other states in the country by this “partial” government shutdown,” she said.

Rep. Shalala of Florida told our members that she not only supports our union but has just joined AFGE, prompting a thunderous applause from the crowd.

“You got my promise and you got my money,” she joked, to another round of applause.

4. We occupied Hart to keep the government open

Only two days before the Trump administration and Congress could shut down the government again, AFGE members, labor leaders, and allies gathered at the Hart Senate Office Building to stage a silent protest to pressure Congress to keep our government open. We stood in silence with our fists in the air for 35 minutes, one minute for each day that 800,000 federal employees were forced to work without pay or locked out of work without pay.

5. Leaders from other unions showed tremendous solidarity with federal employees

They spoke at our conference. They showed up at our Hart protest. They vowed to fight with federal employees. In the labor movement, we always support one another, but the widespread turmoil caused by the shutdown along with the financial chaos inflicted upon 800,000 federal employees brought all of us even closer. Association of Flight Attendants-CWA President Sara Nelson announced from the stage she would call for a general strike in the labor movement in the private sector if the Trump administration and Congress shut down the government again.

We are proud to announce that Lt. Charley Lyke, a police officer at the Louis Stokes VA Medical Center in Cleveland, Ohio, has been named AFGE’s Law Enforcement Officer of the Year, the union’s highest honor for law enforcement officers.

Lt. Lyke, an Army veteran, was instrumental in AFGE Local 31’s efforts to have the presence of VA police officers at our 13 community-based outpatient clinics. His style and approach to talking to fellow veterans has helped change and save veterans’ lives. Many veterans have sought his guidance in finding the right help for dealing with anger management issues and suicidal thoughts. Lt. Lyke also trains local police officers to spot veterans suffering from post-traumatic stress disorder so that they can help these veterans get assistance from the VA instead of putting them in jail. Lt. Lyke is a strong advocate for female police officers whom he sees as valuable assets to the unit because some female veterans with PTSD are only comfortable talking to female officers. Congratulations, Lt. Lyke!

Our union kicked off our #MeToo campaign to prevent and raise awareness about sexual harassment in the federal government and labor movement. AFGE’s Women and Fair Practices Departments’ “Me3” event on Feb. 12 was standing room only as members poured in to listen and share their experiences being a victim or witnessing sexual harassment in the workplace. WFP attorneys were there to discuss cases they won for our members.

AFGE members paid a visit to their members of Congress to explain how underfunding and attacks on their voice at work have hurt the work they do for the American people. They also urged lawmakers to do everything in their power to prevent another government shutdown.

9. Would-be retirees were fired up

AFGE members who are about to retire heard from in-house and outside experts about preparing for retirement, what Congress and the President propose to help or harm their retirement, and what they can do about it. Our special guest was Congressman Steven Horsford (D-Nevada), who told AFGE members that protecting Social Security was one of the reasons he ran for Congress.

10. NVP Jeremy Lannan was named AFGE’s Firefighter of the Year

For the first time, our union’s Firefighting Steering Committee gave out an AFGE-wide AFGE Firefighter of the Year award. The honor of this year’s (honorary) award went to National Vice President for Women and Practices Jeremy Lannan whose years of work organizing and training firefighters contributed tremendously to our union’s efforts to recruit and represent federal firefighters and make sure they have the resources they need to do their job and receive fair benefits.