Despite the wave of progress on LGBTQ issues sweeping across the nation in recent years, progress in the workplace has come as little more than a trickle.

The Supreme Court’s decision that legalized same-sex marriage in Obergefell v. Hodges, while immensely impactful for millions of American, does not address the challenges that LGBTQ workers face on the job. In fact, employers can legally discriminate against lesbian, gay, bisexual, transgender, and queer (LGBTQ) workers in 31 states. 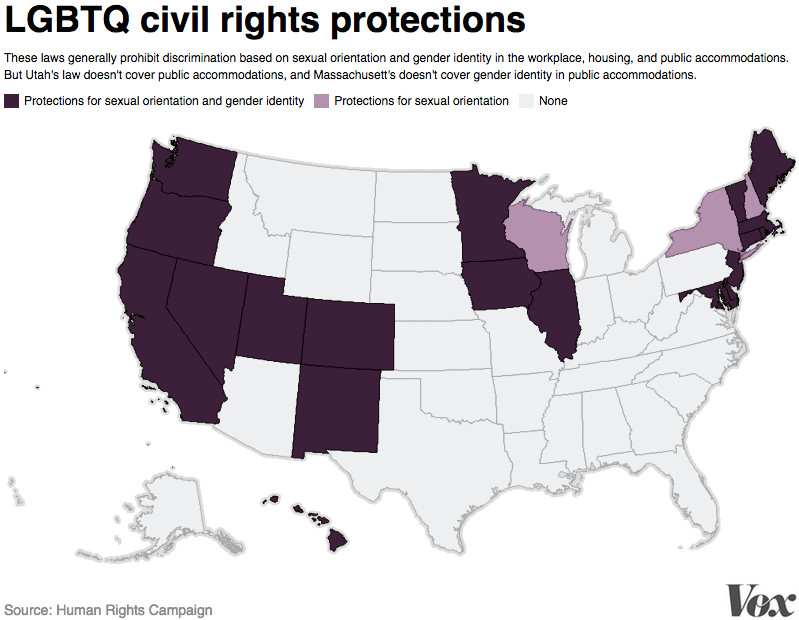 Labor unions have played a vital, if mostly unknown, role in securing the workplace rights of all of our LGBTQ brothers and sisters. Long before states and the federal government adopted laws prohibiting discrimination on the basis of gender, race, and sexual orientation, unions bargained fair practices intotheir contracts. These practices served as the leading edge of wider efforts toward societal and workplace equality that many now take for granted.

As a recent example, LGBTQ people employed by the federal government now have an additional recourse to fight discrimination with the recent Equal Employment Opportunity Commission (EEOC) announcement that complaints of discrimination based on sexual orientation are equivalent to sex discrimination claims under Title VII of the Civil Rights Act of 1964. Without the decades of work by LGBTQ union members and allied union activists, who knows how many more workers would fallen victim to discriminatory acts.

While certainly a huge step in the right direction, there is still a long way to go until full equality is realized. EEO cases can often take years to settle while workers are left awaiting a decision. A strong collective bargaining agreement with anti-discrimination clauses that include sexual orientation, gender identity and gender expression are critical in addressing these issues in a timely manner.

Labor can also change the culture of a worksite. Union activists can positively contribute to creating an inclusive environment at work that allows LGBTQ workers to feel safe and respected.

AFGE leaders across the federation have worked on projects like the AFGE Pride committee, sharing information about national initiatives and advocating for LGBTQ inclusion in collective bargaining agreements.

In 2013, long-time AFGE activist Carolyn Federoff found herself defending the need to keep the protections Department of Housing and Urban Development workers fought for in the late 1980s when management wanted to relegate LGBT workers’ rights to the ‘celebration’ section of the collective bargaining agreement. 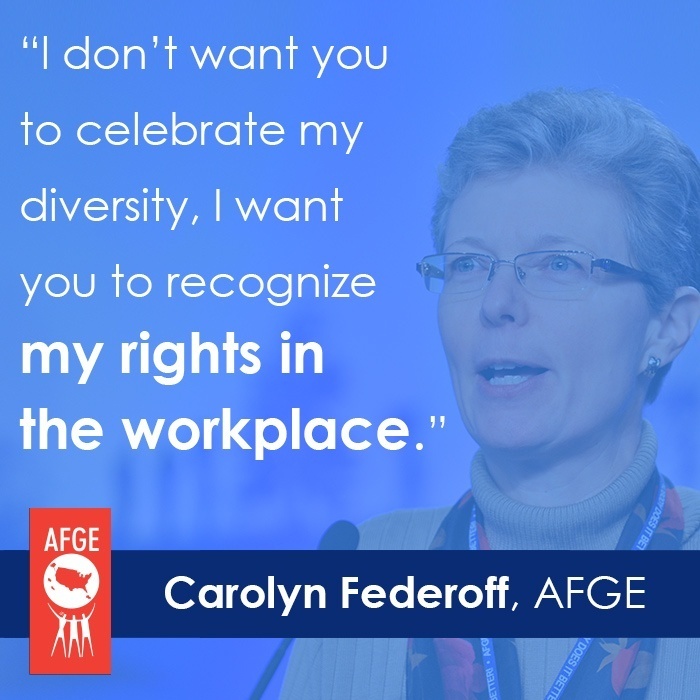 She delivered an impassioned speech at the bargaining table, telling management, “l don’t want you to celebrate my diversity, I want you to recognize my rights in the workplace. Good fences make good neighbors, and good collective bargaining agreements make good workplaces. ”

Another advancement that the labor community has championed is federal non-discrimination protections for LGBTQ people and their families in employment, housing and education. As always, a labor activist’s work is never done. Advocating for the rights of LGBTQ workers creates a more inclusive and affirming work environment for everyone.

Working on behalf of AFGE members doesn’t stop at the negotiating table. Through its Women’s and Fair Practices Departments, AFGE established the AFGE PRIDE program, one of the few among international labor organizations. This program is designed to help LGBTQ members feel welcomed and valued in the labor movement, facilitate efforts to oppose workplace discrimination based on sexual orientation, gender identity and expression, and encourage local chapters to bargain LGBTQ inclusive contracts.

Federal and D.C. government workers are encouraged to become a part of the AFGE Pride program after becoming a member of AFGE. As an AFGE member you join nearly 300,000 other government employees who are united to build a government that works for all Americans and not just the rich and powerful. By standing together, AFGE members have a stronger voice when defending your pay, retirement, job security, and rights.