Happy 2020! We wish everyone a happy and healthy New Year. 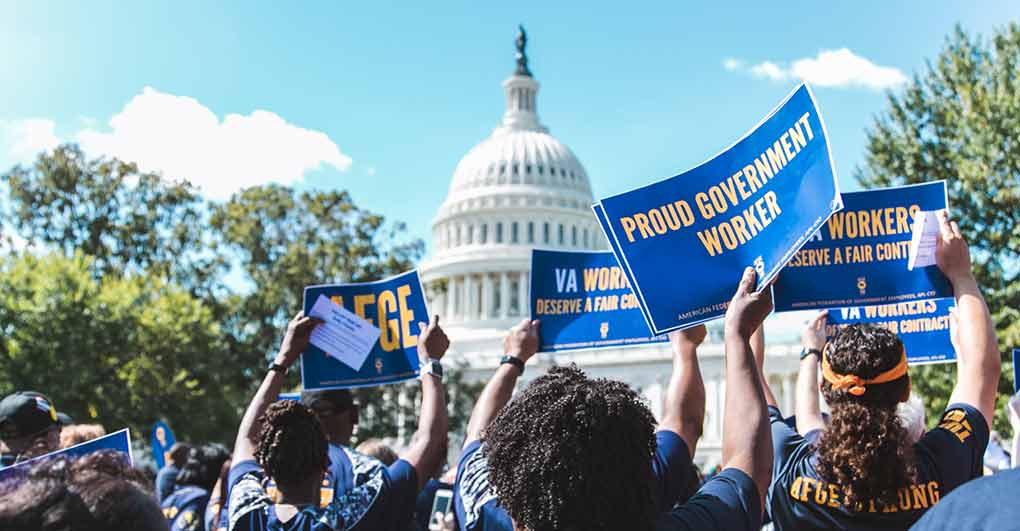 Before the holidays, Congress passed two 2020 government funding packages that included all appropriations bills and several measures AFGE supported and pushed hard for. We thank members of Congress who support federal employees and the work of our government. We thank all our activists and staff who were relentless in making sure our government is appropriately funded and the workforce is fairly compensated. While we didn’t get everything we had hoped for, what we received were significant and made a big difference in many people’s lives.

Here are our top 5 notable wins:

Preventing another government shutdown right before the holidays was our top priority. Nobody should be locked out of work or forced to work without pay ever again. The spending packages now fund our government for the rest of the fiscal 2020, which ends on Sept. 30.

The Trump administration had proposed a pay freeze for federal employees in 2020. We strongly opposed this proposed pay freeze and worked with Congress to make sure it didn’t happen.

There were no cuts to pensions or cost-of-living adjustments in the funding packages.

We blocked spending on inappropriate, expensive service contracts at the Department of Defense. We prevented wholesale privatization of federal jobs through an A-76 public-private competition ban.

We successfully blocked funding cuts at various agencies, such as the Environmental Protection Agency, Census Bureau, National Endowments for the Arts and Humanities (NEA and NEH), National Oceanic and Atmospheric Administration (NOAA), NASA, and others. We also won increases. The Census Bureau, for example, received $7.6 billion, almost double the FY 2019 level. The EPA received $9.1 billion – $2.8 billion more than the administration’s request. The administration had proposed to cut 31% of the EPA’s budget.

We worked with Congress to add $100 million to the Social Security Administration (SSA)’s budget for additional hires to improve public service and prevent office closures. We won an increase of $220 million over the 2019 level to allow the Bureau of Prisons (BOP) to hire additional correctional officers, and $44 million over the 2019 level to modernize and repair facilities. Congress also directed BOP to lift the hiring freeze and blocked closures of low security facilities including associated camps.

The Office of Personnel Management (OPM) was fully funded, which prevents elimination and merger with other agencies. The agency will receive $330 million, an increase of $34.1 million above the FY 2019 level.

It provides $12.4 billion in discretionary spending for programs and activities of the Labor Department, including advance appropriations from prior years. That total is $291 million more than FY 2019 and $1.4 billion more than requested.

The bill provides $216.5 billion in discretionary and mandatory funding for the Department of Veterans Affairs (VA), which is $19.4 billion above the FY 2019 levels. This includes $1.6 billion for major and minor VA construction projects. The bill provides $3.1 billion for the Veterans Benefits Administration, including $125 million more than the administration’s request to “hire additional claims and appellate staff and to meet the requirements to implement the Blue Water Navy Vietnam Veterans Act.”

When you become an AFGE member, you join more than 309,000 other government employees who are united to build a government that works for all Americans and not just the rich and powerful. By standing together, AFGE members have a stronger voice when defending your pay, retirement and job security.