Reports are flying in from around the country about long security checkpoint wait times at the nation's airports. Thousands are missing their flights and some have even been forced to sleep on cots in the airport terminal. The reason? Critical understaffing at TSA.

As the Memorial Day kickoff to the summer travel season began, the cut-first-ask-questions-later politicians who created the problem had done very little to solve it. For years, Congress has diverted money intended for air security and used it for their own pet projects.

But AFGE members who work on the front lines of air security are sounding the alarm. AFGE amplified our call for emergency funding for 6,000 additional screeners by taking out a full-page ad in The Hill, a prominent Washington newspaper, last week. 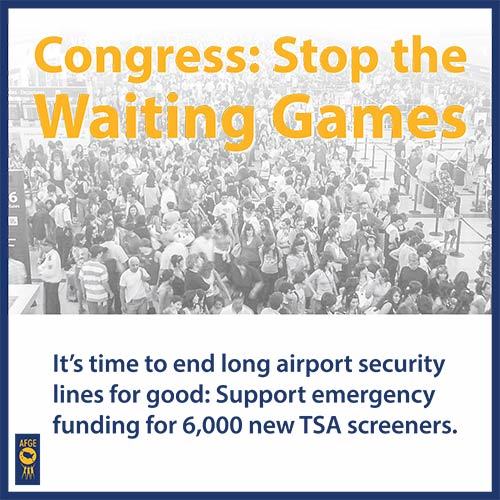 “It’s time for Congress to stop the waiting games and give TSA the resources it needs to meet growing demands at our nation’s airports,” said AFGE National President J. David Cox Sr.

The ad built on the tremendous amount of news coverage that AFGE members have received around the country. TSA officers at airports in Los Angeles, New York, Chicago, Atlanta and Dallas explained to media that long lines were preventable with proper staff, and how they're working diligently to keep up while balancing speed and security.

So far, TSA and Congress have only committed to adding a few hundred more officers to checkpoints, which is about as useful as putting on a ball cap to shield you from a hurricane.

“Adding one or two officers to a security line will do little to ease the crush of passengers waiting two or three hours at times to get through the checkpoint, and excessive mandatory overtime will lead to overworked employees,” Cox said during a recent National Public Radio interview. “This is a serious problem that demands a serious solution.”

TSA currently has about 42,000 officers on the job, down from 47,000 in 2013. At the same time, the volume of passengers has risen 15% from 643 million to 740 million travelers. According to the Bureau of Transportation Statistics, the number of air travelers is projected to exceed 800 million in 2016.

Travelers and TSA employees are both feeling the crush of long lines. Understaffing takes its toll on employees, causing lower employee morale and higher turnover. In fact, TSA workers' morale is among the lowest of the entire federal workforce. Every week, TSA loses more than 100 screeners. In 2014, the agency hired only 373 new screeners – an abysmal number compared to the 4,644 employees who left the agency.

On May 26, President Cox took the stories of TSA officers to Capitol Hill. He testified before the House Committee on Homeland Security’s Transportation Security subcommittee about the series of failures that led to long lines as well as recommendations on how to shorten them.

“Even though TSOs did not create the conditions resulting in seemingly endless lines at airport checkpoints, they are ones who must deal directly with the shortsightedness of TSA, airport authorities, and the Congress.”