Border Patrol agents along the Rio Grande Valley are coping with a record high number of unaccompanied juveniles and immigrants from Central America crossing the U.S.-Mexico border. These apprehensions are straining the border enforcement system and diverting agents’ attention from traditional law enforcement duties.

Nearly half of Border Patrol agents assigned to the Rio Grande Valley are working at duties unrelated to their primary mission, including feeding, clothing and watching after children, AFGE’s National Border Patrol Council (NBPC) reports. Nevertheless, our agents have been dealing with this difficult situation in an exemplary fashion. Many agents are helping to care for these illegal immigrants at personal expense.

“These dedicated public servants have gone above and beyond the call of duty to care for these individuals while ensuring the laws of the United States are enforced,” the council says.

Cartels are taking advantage of the situation and forcing additional juveniles and immigrants to cross the border between the ports of entry, effectively using these immigrants as a human shield to divert resources that would otherwise be spent interrupting their trafficking operations. As agents deal with the influx of immigrants, cartels are smuggling drugs, weapons and individuals from countries with terrorist ties across the border unfettered. 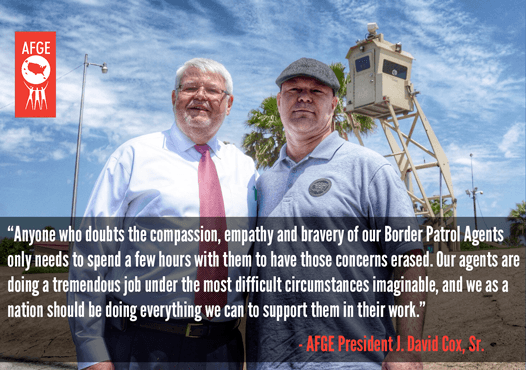 Exacerbating this situation is the fact that Border Patrol agents are working reduced hours because of budget constraints from sequestration. Customs and Border Protection also has curtailed the use of administratively unavoidable overtime, effectively cutting the number of hours Border Patrol agents are able to work and leaving areas unmanned during shift changes.

“Customs and Border Protection needs to do everything in its power to solve this problem, starting with full staffing,” the council states.

“Anyone who doubts the compassion, empathy and bravery of our Border Patrol Agents only needs to spend a few hours with them to have those concerns erased. Our agents are doing a tremendous job under the most difficult circumstances imaginable, and we as a nation should be doing everything we can to support them in their work,” Cox said.