The Bernays Awards recognize the exceptional work of public relations campaigns and tactics.

The Border Patrol Council received an Award of Excellence for its podcast Oct. 20 during an award ceremony hosted by the San Diego and Imperial Counties Chapter of the Public Relations Society of America. 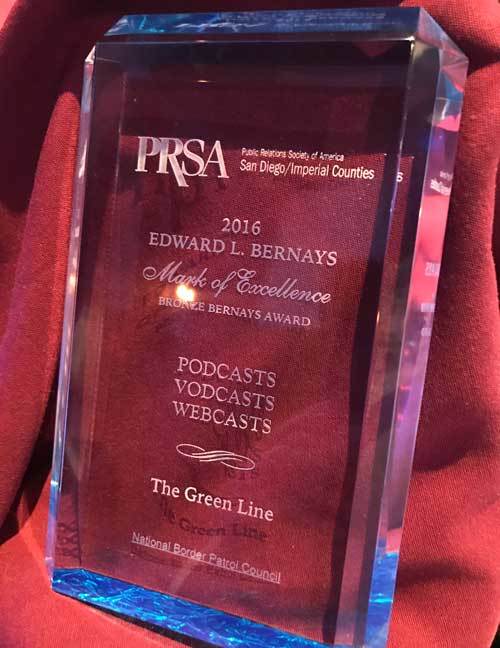 “The goal of the podcast has always been to give a voice to frontline Border Patrol agents and to shine a light on the realities of border security,” said Shawn Moran, vice president of the National Border Patrol Council.

“The Green Line podcast is produced by union members for union members and is a unique way for the Border Patrol Council to communicate with agents and the public about critical issues affecting border security,” Cox said.

The podcast features interviews and commentary on issues surrounding the security of our borders, families, and nation. It is America’s only radio show and podcast produced and hosted by active duty law enforcement officers.

“I think the podcast is important because you hear from actual Border Patrol agents like Art Del Cueto and Chris Cabrera about what is truly happening out on the border,” Moran said. “The podcast gives us a vehicle to discuss stories and issues that the media doesn't cover.”

Learn more about AFGE Members at the Border Patrol