Defense Cuts Turn this Small Community into a "Welfare Town"

Many Americans may think of Washington, D.C. as the place where the majority of government employees work. In reality, more than 85% of federal workers live and work outside of the nation's capital. Those employees help power communities all across the country—like Fort Huachuca in Arizona.

Fort Huachuca and its neighboring city, Sierra Vista, have long worked together to build a thriving community. In fact, Sierra Vista's motto is "a community, a commitment - we support the fort." The city prides itself on being home to active duty service members and the families that support them. Veterans who call Sierra Vista home take advantage of the good weather, numerous places to hike and a lively arts scene.

A Community Partnership At Risk

The town's visitor guide says that "the Fort and the community have accomplished a great deal and look forward to achieving even more in the future to guarantee the exceptional quality of community life that all who live here enjoy." The small-town charm is undeniable, but those happy days of a prosperous partnership may soon come to an end.

The Pentagon is planning to cut its workforce to meet the demands of a Congress focused on the draconian budget cuts known as sequestration.

"If sequestration continues and we start to plan for the 2020 budget cuts, there won’t be anything left here," said Katie Rasdall, AFGE Local 1662 President. "It's devastating to me, it's such a beautiful place and it was such a tight-knit community and it's just getting smaller and smaller."

While some cuts due to the drawdown of forces in Iraq and Afghanistan are understandable, the planned across-the-board cuts would undermine the Army’s ability to face future mission requirements. So far, Fort Huachuca has already lost 1,100 positions in the last year and a half.

AFGE supports the bipartisan budget deal announced Oct. 26 that would suspend sequestration for the next two years and provide much-needed increases in military and domestic spending.

Though the worst has yet to come, recent cutbacks have already set off a domino effect on all of the businesses and service providers who depend on the base and to make their own living.

"It's like every time I drive down there is another business going under there was a closed sign or a for sale sign out in front of it" said Connie Smith, a 20-year-resident of the area. "Everyone has a dream and for some people that's owning a restaurant, running a print stop - whatever it might be, that's what they want to do and a lot of them are military retirees. Well, if the town dies where are they going to go?"

Unless we do something to stop these cuts, communities all across America need to prepare for the worst. '

"We are not alone," said Rasdall. "There are 27 other installations that could be facing what we're facing here."

What can you do to stop sequestration once and for all?

The cuts, scheduled for 2016 and 2017, will mean the loss of 17,000 civilian jobs and 40,000 active duty troops — enough people to fill Madison Square Garden three times over. But it is just the beginning.

According to the Army’s 2020 plan, sequestration would result in cutting another 30,000 soldiers and an even higher percentage of civilian employees, creating a recession that no local economy could survive.

It's unclear where the actual cuts will take place for civilian employees, because those figures have yet to be published. We do however have details where military personnel will be hit the hardest, and it doesn't take much imagination to anticipate the major civilian cuts that will likely follow. 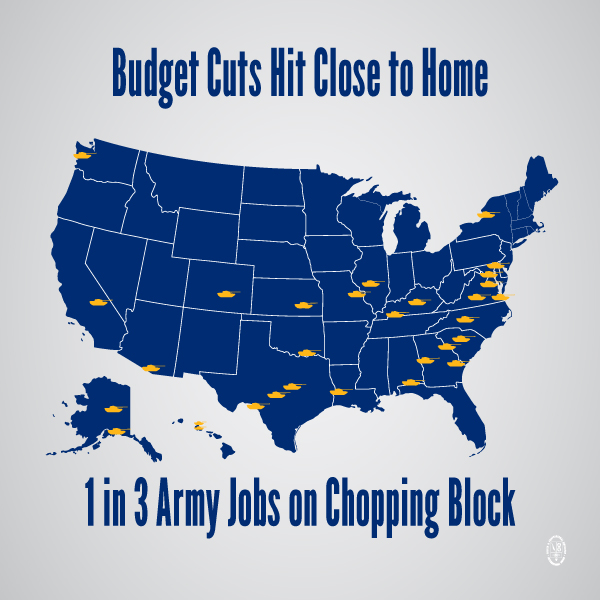 It's almost a bad joke: the Pentagon claims to need to cut costs and close major installations, yet, of its three workforces— military, civilian and contractor personnel —the most expensive, contractors, has remained relatively unscathed.

“If cutting expenses is the number one priority, then the first place DoD should target is the vast bureaucracy of contractor personnel who cost more than federal workers and are less accountable to taxpayers.”

Rasdall and other members of AFGE Local 1662 continue to speak out and expose what the arbitrary cuts have done to their community. She hopes that the voices of Americans in other military communities can change the course of action when it comes to military installations like hers.

"This is a real eye opener for people to fight back and open their mouth to try and change what's going on," she said.