Hundreds of AFGE Members Take the Hill for 'Shared 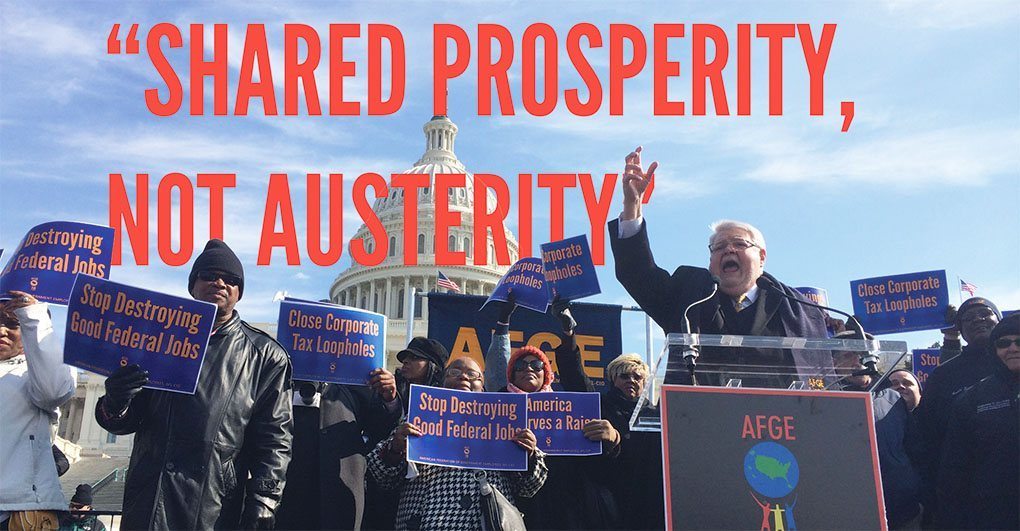 AFGE’s 2014 Legislative Conference got off to a fast start, but it ended with a bang. Just a day before the close of the conference, hundreds of AFGE members took their fight straight to Capitol Hill and put elected officials on notice.

"Shared prosperity, not austerity!" chanted the hundreds of AFGE members who gathered at the West Front Lawn of the U.S. Capitol in Washington, D.C. Sharing the same sentiment with federal workers were former House Speaker Nancy Pelosi, Minority Leader Steny Hoyer, Sen. Ben Cardin, Rep. Jim Moran, Rep. Donna Edwards, and Rep. Keith Ellison who braved the cold to show support for the workers. The lawmakers praised AFGE members for standing up not only for themselves but for all workers who don't have a voice at work. They urged federal employees to keep pressure on Congress to do the right thing for the whole country and not the privileged few.

Also joining AFGE members at the rally were American Postal Workers Union National President Mark Dimondstein, our brothers and sisters from the United Steelworkers, and Americans for Tax Fairness Executive Director Frank Clemente, who told the crowd that instead of freezing federal pay, Congress "should have frozen out the lobbyists swarming Capitol Hill trying to get tax breaks for their powerful clients."

After the conference, AFGE members paid a visit to their senators and congressmen to discuss their concerns over the attacks on their compensation, their union, and hostile bills and proposals.

Visit the AFGE Flickr page to see more pictures from the Rally for Prosperity.