In the United States, we're taught that if we work hard and play by the rules, the doors of opportunity will be open to us. But throughout history, working people have had to fight for their slice of the American Dream against the forces of greed and corruption.

From the effort to end child labor, to the fight for an eight-hour work day, and by simply demanding to be paid a living wage for the work we do, it’s evident that when working people raise our voices together, we achieve great things.

Every year, May 1 is designated as International Workers Day. It's a day to recognize the courage, sacrifice, and contributions of those who have fought tirelessly to ensure a fair return on our work and safe workplaces for all. It's also a day to reflect on what our society has become and what that means for working people like us.

A Backward Slide for Workers' Rights

In the United States and around the world, workers' rights are being taken away. There are increasingly two categories of people – those who work hard and struggle to make ends meet, and those who have changed the rules to pad their profit margins.

While a handful of the world’s richest control most of the global wealth, nearly half of the world’s population – more than 3 billion people – live on less than $2.50 a day. Workers in many countries such as Bangladesh, Guatemala, Peru, and the Philippines face violence or are even murdered for standing up to their employers in the effort to obtain a decent standard of living.

Powerful special interests around the world are looking to cash in on the product of workers' efforts and are only concerned about their own bottom lines. The U.S. Chamber of Commerce, for example, pressured the Serbian government to reduce workers’ rights and pay in order to increase profits for American companies doing business there. The U.S. Chamber of Commerce’s pattern of interference against workers has been going on in many countries for years.

The International Trade Union Confederation (ITUC), which comprises 328 affiliated organizations in 162 countries, has released a report on the status of workers’ rights in 141 countries, with shocking results. In a nutshell, workers’ right violations are rampant all across the world. The United States, for example, was rated 4 (on a scale of 1 to 5 with 5 being the worst) for its systematic violation of workers’ rights.

DESCRIPTION OF THE RATINGS 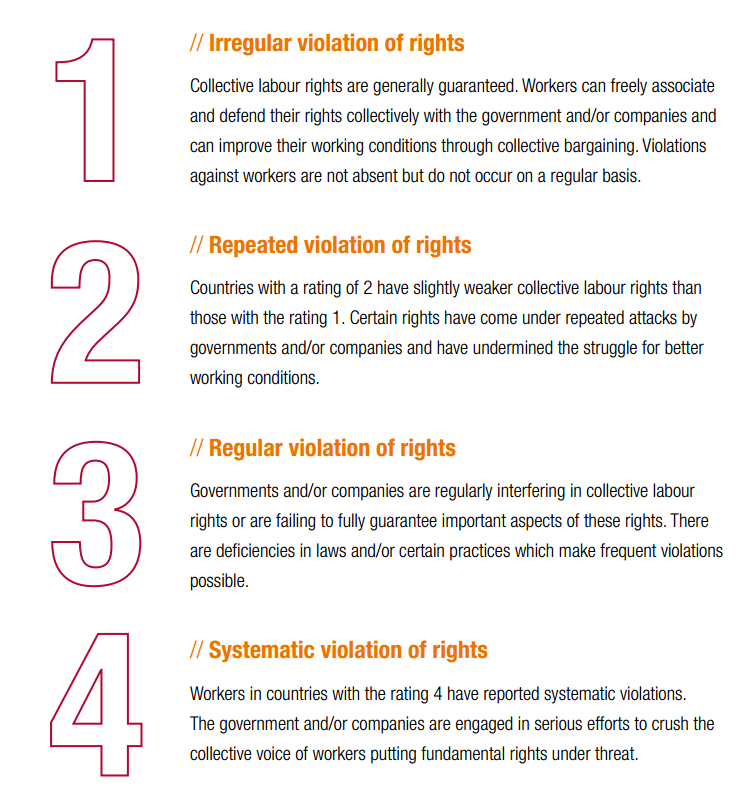 Exploitation of workers at the hands of powerful corporate tycoons is a global issue that needs to be addressed fully and urgently. AFGE stands with working people here in the United States and around the world to defend our rights, financial security, and families.

Here are some of the struggles working people are facing, what they’re doing, and how you can do your part to protect the American Dream:

Maximizing profits at the expense of workers is something big corporate employers have been doing for decades, and Verizon is no different.

Nearly 40,000 Verizon employees from Massachusetts to Virginia have been on strike to protest the company’s anti-worker agenda. Despite making $39 billion in profit over the last three years, the company has outsourced 5,000 jobs to India, the Philippines, and Mexico, exploiting these countries’ poverty-wage workers. It has also outsourced work here at home to low-wage contractors. It has forced employees to transfer to work locations miles away from their families, and fought workers who wish to join in union within the company’s wireless division.

Over the last decade, it has slashed its workforce by nearly 40%.

The employees spent eight months negotiating a new contract to avert the strike, but the company has continued to push to outsource and send jobs overseas.

Verizon employees, represented by the Communications Workers of America (CWA) and the International Brotherhood of Electrical Workers (IBEW), are calling on the company to settle a contract that ensures high quality service and saves middle class jobs.

But the last straw was when one of their coworkers, Frederico Lopez, was fired for asking for a higher wage. The Sakuma Brothers farm had set production standards so high that even the fastest workers made less than minimum wage.

They launched a strike in 2013, which led to the formation of an independent farm worker union Familias Unidas por la Justicia. Sakuma management not only broke multiple agreements but also sent in security guards to intimidate workers and their families. Management has refused to sign a legally binding union contract, prompting workers to ask shoppers to boycott Sakuma and its main distributor Driscoll’s Berries.

Driscolls is the largest berry distributor in the world and has a history of suppressing union organizing. It also distributes berries from farms in San Quintin, Mexico, where wage theft, child labor, and sexual abuse are widespread. More than 30,000 workers recently went on strike to protest $7 a day wages.

An endless string of lawmakers and senior officials have engaged in serious efforts to crush public servants and their ability to form a union. From silencing whistleblowers to cutting their pay to undermining basic merit system rights, public servants have been through it all.

The onslaught targets even those who save lives and take care of our nation's heroes. At the Department of Veterans Affairs, some lawmakers have, for many years, tried to change the law to take away employees’ voice at work and protections. Proposals like this would allow managers to fire anyone with little notice or recourse. There have also been attempts to privatize the VA and TSA.

A recent governmentwide proposal is even more outrageous. It would take away an important process that allows employees to protect and defend themselves if their manager unfairly rates their performance and wants to cut their pay, reduce their grade, suspend them for a long period of time, demote them, or fire them.

These elected officials have already forced employees to give up $182 billion in cuts to their compensation since 2011. Congress is also seeking to replace only one in three employees who retire. If they get their way, good middle-class jobs will be a thing of the past. Our lawmakers need to protect every last job they can to keep working families afloat – not cut them by the hundreds of thousands. 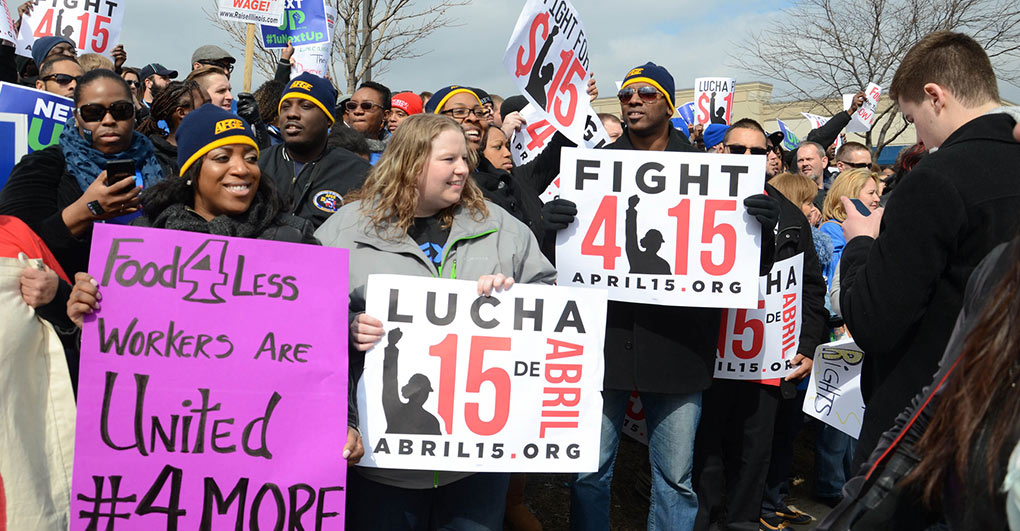 ‘Fat profits, lean wages, non-existent benefits’ appears to be the motto of the fast food and retail industries. At the heart of the fight for fair wages is McDonald’s, the largest and most profitable fast food business, raking in
$1 billion a year in profits. McDonalds’ profits went up 35% in the first quarter of 2016, yet the people behind the happy meal are paid poverty wages, around $9 an hour.

McDonald’s recent tiny wage bump is a farce. In addition to the meager increase, the raise only applies to 90,000 employees working at corporate-run restaurants but doesn’t apply to 660,000 employees working at its franchises. Despite requiring heavy fees and maximum control over franchises’ operation, McDonald’s insists it’s not responsible for poor wages and working conditions. In fact, its “Help Line” tells people to go on food stamps.

Taxpayers are left picking up the tab – about $1.2 billion in public aid goes to McDonald’s workers every year. Half of all fast-food workers also rely on public aid. The Fight for $15 movement tries to change that. Indeed, no one who works full time should live in poverty.

But this is about more than just the minimum wage – all American workers deserve a raise to keep up with soaring housing, health care, and education costs.

No one individual can stop corporate exploitation of workers alone – it takes a collective action of all of us to affect change. International Workers Day serves as a reminder that working people need to join together and stand up to corporate greed. We need to hold our lawmakers accountable when they want to enrich their campaign contributors at the expense of working people.

Everyone deserves a fair shot at a decent life. Share this message if you believe an economically secure life should belong to everyone, not just the rich and well-connected.