The Fire that Sparked the Labor Movement

It takes just one spark to light a blazing fire, and one tragedy to ignite a movement for justice.

March 25 marks the anniversary of just such a tragedy. On that day in 1911, a fire swept through the Triangle Shirtwaist Factory in New York, killing 146 garment workers. Most were young women who had come to the United States from Europe and Russia in search for a better life. Instead they found a system drunk on corporate power and negligent of even the most basic worker rights.

The horrific fire was a national wake up call on workplace safety standards, and helped end the indignities and exploitation factory workers of that period were forced to endure.

Even on this grim anniversary, the fire is a powerful reminder of the importance of policies to protect workers and the vital gains that come with having a voice at the workplace.

18 Minutes: Left to Die with No Way Out

New York’s nickname – The City That Never Sleeps – might as well describe many of its workers who toiled in sweatshops in the early 20th century. Working in a cramped space at lines of sewing machines, these Triangle factory workers were paid a mere $15 a week despite working 12 hours a day, every day of the week. The factory owners saw these women as cogs in a machine.

But the owners' terrible business practices went well beyond low wages and hellish conditions: In the past, they weren't below burning down their own business (before the daily shifts began) in order to collect on the insurance money – a motivating factor when they decided not to install sprinkler systems in the factory.

On the afternoon of March 25, 1911 a fire broke out on the 8th floor of the building. After a member of management couldn't get the rotted and rusted fire hose to work, panic swept the floor. The owners escaped, neglecting to alert those left behind at their stations. By the time those workers smelled the smoke and saw the flames, it was too late.

Flames blocked the stairwell, forcing them to run down a narrow fire escape that broke under their weight. More than a dozen workers plunged 100 feet to their deaths. Of the four elevators, only one was operational. Dozens of young women crammed in, and the elevator was able to make a few trips before the heat caused it to break down. Thirty-six women died while they desperately tried to follow the elevator down the shaft.

The owners, worried about theft, had locked the ground level doors from the outside, stranding the workers at the bottom of the stairs. As firefighters arrived, flames had engulfed the building, leaving those on the top floors with the windows as their only means of escape.

But the firefighters’ ladders only reached the 7th floor, leaving them with little hope on the 9th. Fifty-eight women died in their leap to escape the flames.

In the 18 minutes since the fire began, forty-nine workers had died from smoke inhalation or burned to death in the building. Of the 600 workers who worked on the three t

The following weeks saw public outrage and workers taking to the streets to demand accountability and changes in workplace safety laws. The role of labor unions in preventing such a tragedy became clear.

After the fire, the Ladies Garment Workers Union (LGWU) led a protest for higher wages, shorter hours and extra pay for overtime. They called for better safety conditions, like sprinkler systems in the factories and adequate fire escapes. 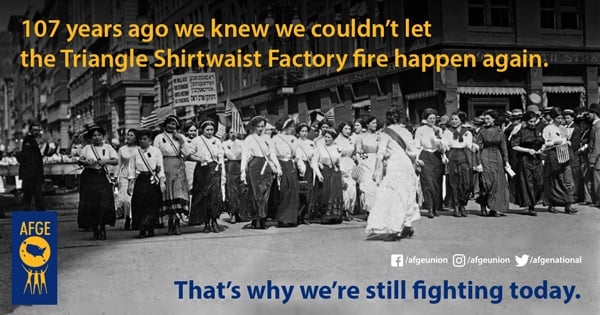 And, despite the protests of business and the imprisonment of many of the strikers, the unions won. These protests, followed by hundreds of others, led to the 40-hour work week, the sick leave, the health benefits, the safety precautions and the child labor laws that we know and love today. 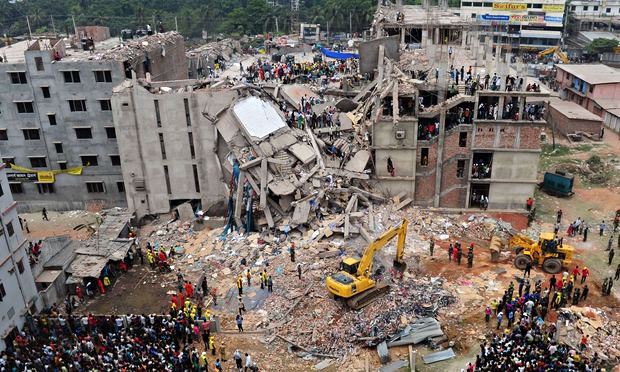 Despite new safety precautions and policies, factory owners and corporations have found ways to maximize their profits off the backs of workers. More than 100 years after the Triangle fire, we still have sweatshop conditions right here in America.

In Los Angeles, underpaying workers, poor ventilation, denial of rest breaks, and unsanitary workplaces are still a huge problem. According to a 2015 report, half of garment workers work 10 hours or more per day and are paid on average $5 an hour, well below the city’s minimum wage of $9.

One third of workers reported not being allowed to take a rest break when they need it. Half reported working in unsanitary buildings infested with rodents and cockroaches, no access to clean bathrooms and poor ventilation. About one third said they did not have access to clean drinking water onsite and a whopping 70% reported dust pollution in their factories.

The garment industry is not the only serial violator. McDonald’s workers filed dozens of health and safety complaints in 19 cities after workers have suffered burn injuries because of pressure to cook food too quickly while extremely understaffed. Many has said they've been forced to clean fryer oil while it was still hot. The underpaid workers, along with other fast-food and retail workers, also staged protests, calling for a living wage of $15 an hour.

Poultry and meatpacking workers are also the victims of corporate America's emphasis of profit over the safety of people. According to a petition filed in 2013, they have been forced to work at unsafe speeds that led to serious injuries. Because of the speed requirement, many workers were denied breaks and forced to urinate and defecate in their own clothing while working.

But what caused massive international outrage took place in Bangladesh in 2013 when Rana Plaza, a garment factory building that produced clothes for western brands such as Jo Fresh, J.C. Penny, and the Children’s Place collapsed, killing more than 1,100 workers and injuring more than 2,500.

The workers were told to return to work despite visible cracks in infrastructure. More recent fires broke out in Bangladesh factories, killing and injuring people as safety improvements have been slow.

As the very people who enforce safety laws, you’d think working for the federal government is the safest place in the world. That’s not always the case.

In 2015, an AFGE local called for a congressional investigation after hundreds of people got sick and died at a GSA facility in Missouri after having been exposed to mercury, lead, uranium, asbestos, and other toxins.

In 2016, Workers at Ft. Gordon, Georgia protested unsafe working conditions due to asbestos – a substance that causes cancer – moldy facilities, and poor ventilation.

Veterans Affairs hospitals still have mold issues that workers and veterans deal with. A few years ago, AFGE blew the whistle on a Legionnaires’ outbreak at a VA medical facility in Pittsburgh that killed five veterans. We asked the Occupational Safety and Health Administration (OSHA) to investigate reports of elevated levels of Legionella at a VA hospital in Illinois.

We Can't Forget the Lessons of the Triangle Fire

The Triangle Factory workers died because of weak safety measures, and more than 100 years later, we still have a long way to go.

Congress and agencies need to improve and enforce the laws and regulations. Violators need to be held accountable for the safety and security of all workers. No one should have to decide between a job that supports their family and their own health and safety.