To pay for massive tax cuts for corporations and the rich, the Trump administration is proposing to eliminate many important services that federal workers provide to the American people.

Under Trump’s 2020 budget proposal, most of the agencies that have already struggled through years of underfunding will see even further, in some cases drastic, cuts in their funding. This will undoubtedly hurt the missions of the agencies and put every American at risk.

Here are the agencies slated for reductions: 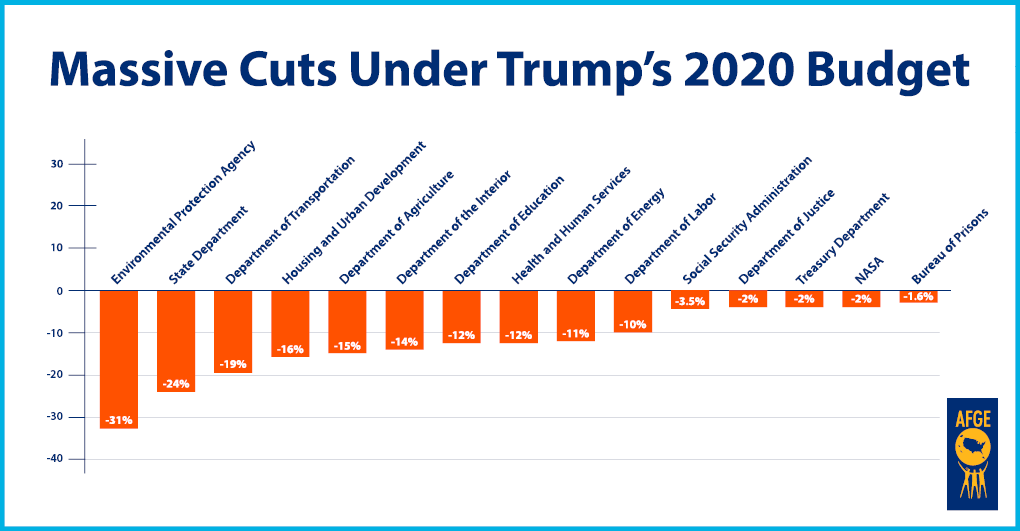 The administration has not released all of the details of the budget, but here are a few of the worst provisions from what we know so far:

The severely understaffed agency is facing a whopping 31 percent cut, or $2.7 billion. Instead of hiring more people to protect the American people from environmental harms, the administration is getting rid of nearly 2,000 accountable even more. The EPA’s staffing is currently lower than it was during the last year of the Reagan administration. As a result of the Trump administration’s hostility toward the agency and its mission, researchers and scientists are leaving the EPA in droves. As if to make its intention of siding with polluters clear, the administration has rolled back several anti-pollution regulations that protect public health.

The administration is taking away $12.4 billion from the agency that has saved countless lives. The 12 percent cut may be just a number for the administration, but to the American people who are living with deadly illnesses like cancer, the cut in funding for research is a death sentence. Under Trump’s 2020 proposal, budgets at the National Institutes of Health and the Centers for Disease Control and Prevention are being slashed by 12 percent and 10 percent respectively, with the National Cancer Institute absorbing the largest chunk of the cut.

BOP has been dealing with staffing shortages since at least 2015. The staffing situation got worse when the administration decided last year to cut 6,000 positions. To deal with staffing shortages of correctional officers, the agency has to compel teachers, secretaries, nurses and other support staff to step in and help guard inmates, creating even greater security risks for everyone. Ignoring severe understaffing at prisons across the country, the administration is seeking to cut BOP’s budget even further next year – by $114 million. It is slashing 34 support positions from the payroll and is not hiring more correctional officers.

The Trump administration is taking $25 billion away from seniors, including $10 billion from people with disabilities. We don’t know yet if field offices are being closed.

Airports across the country are understaffed. The situation went from bad to worse earlier this year when the Trump administration shut down the government for 35 days, forcing TSA officers to work without pay. Even though the White House is seeking a small increase of about 1.3 percent for the agency in 2020 for both personnel and technology, it is unlikely that the money is enough to increase TSO staffing or a pay raise that the shutdown proved was desperately needed by the workforce.

OPM plays an important role in answering to the needs of employees throughout the federal government. Our union represents more than 700 OPM employees, and the agency’s independence and integrity are crucial.

The Trump administration’s budget proposes to transfer OPM functions to the General Services Administration. No other details are provided, but our union will analyze the proposal as soon information is available. We will fight vigorously to protect the integrity of the agency and ensure that our workforce is protected from any job cuts.

The Trump administration is cutting $11.5 million from the Food Safety and Inspection Service budget. We will keep you posted once details become available.