My Day With Cesar Chavez

Seven days before his death, Cesar Chavez and his son-in-law stepped off a plane in Grand Rapids, Michigan. On that crisp, clear morning, Chavez was scheduled to speak to a student group at Grand Valley State University. The event, arranged by a Latino student group, had sent their president to pick Chavez up. The young man, an Army National Guard infantryman, pulled up in his beaten, red and white Oldsmobile convertible and offered to put the top up for Chavez.

Chavez gave a gracious smile to the kid and insisted that top down was perfectly fine. In that moment, Rosendo Rocha, the Latino group’s president and future member of AFGE, started down a path that would define the rest of his life.

“There is a little bit of disbelief. You hear about these people and you read about them in history books but meeting them – you’d expect him to be 7 feet tall, overbearing and overpowering,” recalled Rocha. “But this guy was short, frail, very modest, and he really was like my favorite uncle.”

Rocha, a fourth generation migrant worker, was the first in his family to break the migrant worker life-cycle and attend college. He grew up in a small farm community and worked alongside his parents and grandparents in the fields on the weekends. Like a favorite uncle, Chavez asked Rocha about his family and life.

“He was very interested in my military career, the fact that I’d been a migrant kid” said Rocha. “So the time we spent alone was, well I was being mentored without even knowing it.”

Chavez had grown up in California and quit formal schooling in the seventh grade. Instead of the classroom, he spent his days alongside his family in the fields as a full-time migrant worker. His story was not atypical for someone of his background, but what he did next defied precedent and all expectations.

Over the course of his life, Chavez organized strikes and boycotts against agricultural companies and government policies that treated migrant workers as second class citizens. Those toiling in the fields, growing and picking products that fed America, had tragically short life-spans. The work was hard and toxic pesticides endangered their health. He co-founded the National Farm Workers Association, later called the United Farm Workers union or UFW.

Although Chavez had said to leave the top of the convertible down, he huddled next to the car’s heater as Rocha toured Grand Rapids. It was a reminder of the ravages his work had left on him. Chavez followed in the tradition of Martin Luther King, Jr. and Mahatma Ghandi, employing non-violent protests to fight for all American agricultural workers. One of his greatest feats, documented in the film “Cesar’s Last Fast,” was a 36 day hunger-strike which called national attention to the conditions many workers faced.

In the days before his death, Chavez was preparing for another fast to protest the lack of education and daycare of migrant children. He had always received death threats over his work, but told Rocha they had intensified lately. Chavez said he was worried about his safety and for those around him. Rocha, whose strong presence was built from his training with the National Guard, agreed to serve as a bodyguard for Chavez when he returned to Michigan in a couple of weeks.

Chavez was one of the first big speakers to visit the young Grand Valley State University. Rocha and the Latino group thought he would help students connect their heritage to their daily life and help them find their place in history.

“He was an icon within the Latino community that would help ground the group I was with,” said Rocha. “He helped guide people who went on to be doctors and lawyers and such. Being a fourth generation migrant worker, it was important for me to hear him and hear his stories.”

In preparation for the visit, Rocha had approached a local Catholic Church where Chavez had visited during the 1960’s and 1970’s while working for migrant workers in Michigan. Rocha said he had intended to invite the church, but the priest told him they were going to show up to see Chavez even if they hadn’t been formally invited.

Throughout his visit, Chavez was met by new and old friends. As the day waned, Rocha drove Chavez to a local restaurant where they met both seasoned and young workers who shared their own war stories and tales of new battles.

“Within the Latino culture, weddings and funerals are a big get-together. There is a lot of reminiscing of the past,” said Rocha. “There was one gentleman who had been in the great boycott marches in the 1960’s. There were probably 20 to 30 people in the room, sitting around tables and talking about those days.”

“I just sat there just kind of like a bump on a log, absorbing and listening to all the history being discussed -- it was like a family reunion.”

As migrant workers, Rocha’s parents and grandparents were very familiar with the work of Cesar Chavez. Unfortunately, they couldn’t take off from work to visit with him in person. Chavez, however, was gracious enough to give them a call on the telephone.

“One of the biggest messages that he said was that if you take care of those people around you – if you help them take care of their families – they’ll take care of you and your family,” said Rocha. “So that’s what family – what solidarity – is. It’s about all of us, not just one of us. That message has stayed with me.” 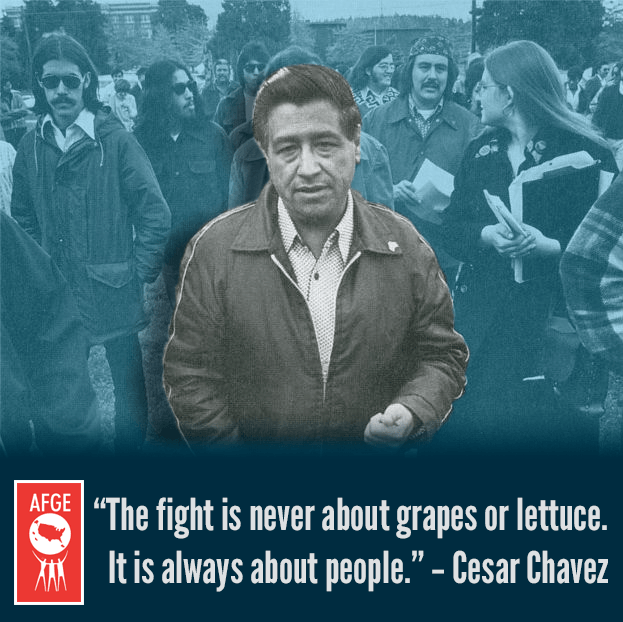 On April 23, seven days after Rocha had driven Chavez around Grand Rapids, he and his classmates were planning Chavez's return trip. A member of the Grand Valley State University staff entered the classroom and told the group that Chavez had passed away – peacefully in his sleep and with a soft smile on his face – early that morning.

“It was a very sad day,” said Rocha. “Right away we reached out to the church and the priest again. They were planning on putting a group of people together to go out and be part of his funeral procession.”

Ultimately, the procession included 50,000 people, from migrant workers to activist celebrities and politicians. The movement that Chavez had started turned out in incredible numbers to celebrate his life. But Rocha was unable to attend.

“The military wouldn’t let me out to go do that.” Instead, Rocha remembered Chavez and his deeds through the mementos he had taken from that day in the Oldsmobile Convertible. Chavez had signed a poster – a composite of the trials he faced and the triumphs he achieved.

“If you look closely at the poster, it’s made up of faces. Faces of union activists through the decades he worked with,” said Rocha. “The mountains are actually women laying down, the women who died in the fields. That pictures holds a lot of meaning.”

That poster now hangs in Rocha’s living room, where his daughters often ask about the man and his work.

“I tell them, he was one person that motivated others to stand up for their rights. He wanted to correct a wrong,” said Rocha. “I see AFGE as one entity trying to do the same for all America. Just like he said: help people take care of their families and protect them and they’ll help you protect yours.”

“AFGE does the same thing. Our folks, take care of each other and it keeps the Union strong. It’s not about one individual.”

Rocha has also met Dolores Huerta, who worked alongside Chavez, even joining her to celebrate her 90th birthday.

“Two great Latino icons in my presence in one lifetime,” said Rocha, slightly astonished. “Seeing them in a room with workers – they lit up a room just by being humble – by being modest and keeping it about solidarity. They said that ‘together we’re stronger than one.’”

Rocha has tried to instill the same hard work and ethics in his daughters, even taking them to the migrant camps where he and past generations of his family worked.

“We stayed out there 12 hours picking blueberries. I wanted them to see how it was for the day. For the appreciation of what hard work is, what a good education can get them and how it can improve their lives.”

Rocha credits his military service, a trait he shares with Chavez, as the reason why he focuses on solidarity and how the human connection will always move people to create a better world.

“We’re back to the grassroots, we’re back to doing things Cesar did, the way Delores did. That will never go away,” said Rocha. “That face-to-face connection, touching them, letting them see you. There’s a lot in shaking someone’s hand, giving someone a hug, being genuinely happy to see someone and saying ‘hey brother, hey sister, I see you. How can I help you?’ Then, we help them step up.”

Cesar Chavez would have been 88.