New Effort to Shore Up Sinking Morale at TSA

Ever wonder why the Transportation Security Administration has always been at or near the bottom of every employee satisfaction survey, including the latest one?

For one thing, their job is one of the most stressful jobs in the government. Every TSA officer knows that a single mistake could result in a tragedy that involves hundreds of lives. That’s why they joined TSA in the first place. They want to protect their country. They want to make a difference. They actually love their jobs.

What they don’t love, though, is how they are treated by everyone. First off, they don’t always have the resources to do their jobs. They don’t understand why Congress had to put an arbitrary cap on the workforce, why TSA has refused to fully staff check points. As many airports are understaffed, travelers facing long lines often take out their frustrations on them.

Even though they are required to pass a rigorous test every year – not many jobs require that – TSA officers are among the lowest paid federal employees, earning on average $35,000 a year. Their pay system is unfair, subjective, and confusing.

On top of that, they have little job protections, often working under the whims of managers. No wonder their turnover rate is sky-high at 10%. This should be a cause for concern as a high turnover is never good for financial or security reasons.

Good news is, somebody in Congress recognized this is a problem.

Sen. Brian Schatz of Hawaii is leading an effort to improve air travelers’ safety by making it easier for officers to do their jobs and boosting their morale. His bill, the Strengthening American Transportation Security Act of 2016, would end TSA’s unfair pay schedule and put TSA officers on the General Schedule pay scale just like most federal employees. The bill would provide them with much needed worker protections, like the right to keep their jobs if they need to take personal leave for family or medical reasons.

“Transportation Security Officers are the essential federal workers who screen baggage, staff checkpoints at our airports, and play a critical role in maintaining the safety of our aviation transportation system,” said Sen. Schatz. “We must address inequities and inconsistencies in federal aviation employee treatment in order to provide Americans the highest level of aviation transportation safety. My bill will ensure greater fairness and uniformity in federal employee protections and help improve the morale, stability, and performance of our vital transportation screening workforce.”

Sen. Schatz also met with a group of TSA officers in Honolulu on Dec. 13. The officers thanked him for his support, and he reiterated the need to boost their morale. 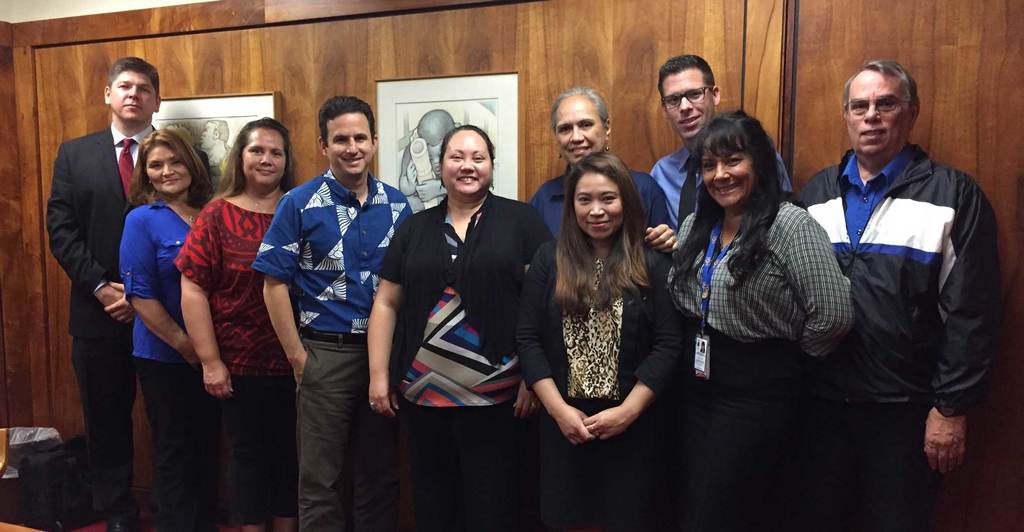 “I want to make sure you are not intimidated out of your job,” he told the officers.

“We are thankful for the support TSA officers have received from Sen. Schatz and the cosponsors of this bill,” said AFGE National President J. David Cox Sr. “It is outrageous that, despite shouldering this heavy responsibility, they lack the same workplace rights as other federal employees.”

The bill is co-sponsored by Senators Sherrod Brown of Ohio, Elizabeth Warren of Massachusetts, Al Franken of Minnesota, Jeff Merkley of Oregon, Gary Peters of Michigan, Jon Tester of Montana, and Martin Heinrich of New Mexico.