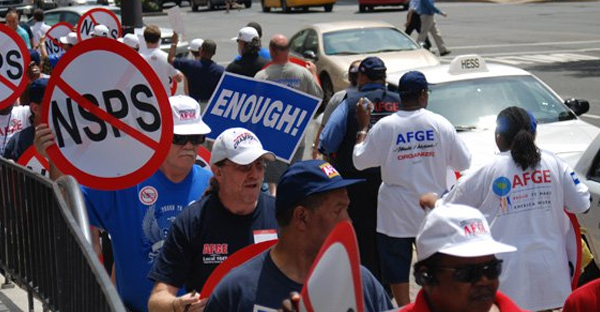 The Pentagon’s ‘Force for the Future’ proposal is nothing more than a repackaged National Security Personnel System (NSPS) aimed at stripping employees of their workplace rights and protections.

“The Department of Defense is spinning these proposals as the ‘Force of the Future,’ but they are nothing more than a bad flashback,” AFGE National President J. David Cox, Sr. said about the proposed recommendations that would determine how employees are hired, paid, promoted, and managed.

NSPS was one of the most spectacular failures in personnel management. It created turmoil, killed employee morale, and undermined readiness. Among other things, performance recognition suffered from the fact that DoD had cut budgets and never adequately funded it. Pay increases were mostly determined by the employees’ proximity to the Pentagon. AFGE objects to these proposals being repackaged and sold to us again.

A particularly troublesome proposal would transfer civilian employees from Title 5 of the U.S. Code, which covers the bulk of federal civil service employees, to Title 10, which primarily covers the military. DoD’s report outlining the proposed changes is filled with vague, non-specific and often conflicting statements about how this change would apply to the workforce and which employees would be affected.

“While we are still working to understand the implications of such a drastic move, it is clear that this move would give the current Defense secretary and any future secretary a blank check to craft a personnel system that could easily undermine and violate the fundamental principles of our long-established commitment to a merit-based civil service system,” Cox said. “We believe all employees should remain under Title 5, and be afforded the rights protected therein.”