Genevieve Howe and Jodie Shapiro stood in front of the Environmental Protection Agency (EPA) headquarters in Washington, D.C. the morning of May 12, a postcard and pen in hand. They were writing a thank you note for EPA employees, who are being targeted for massive budget and staff cuts by the Trump administration.

They heard about the EPA thank you event, so they came from Boston to show their support for the agency to keep fighting polluters and protecting public health.

“Dear EPA – Thank you for nearly five decades of service to clean up and protect our air, water, and land. We cannot live without your work and without strong environmental regulations,” Howe wrote on the postcard.

To Howe, this was personal. Her father, Sydney Howe – president of the Conservation Foundation –  helped start Earth Day back in 1970 along with Senator Gaylord Nelson and Denise Hayes. On that first Earth Day, 20 million people across country marched to demand a clean environment. That was when environmental activism entered the mainstream of American life, and the American environmental movement was changed forever.

“It is very meaningful for me to be here today,” Howe told AFGE.

A Week-long Show of Appreciation

The D.C. event that Howe and Shapiro attended was one of many thank you events held across the country the week of May 8. Amid the attacks on the EPA and its workforce, attendees wanted to let EPA employees know that they have their back and they appreciate the work that EPA employees do.

At the D.C. events, cookies and ice cream were handed out to EPA employees along with thank you postcards and the We Stand with the EPA letter signed by a coalition of 54 environmental organizations.

The letter read: “We will defend you, your work, and the programs that allow EPA to fulfill its mission, in Congress, in the courts, in communities, and in the streets.” 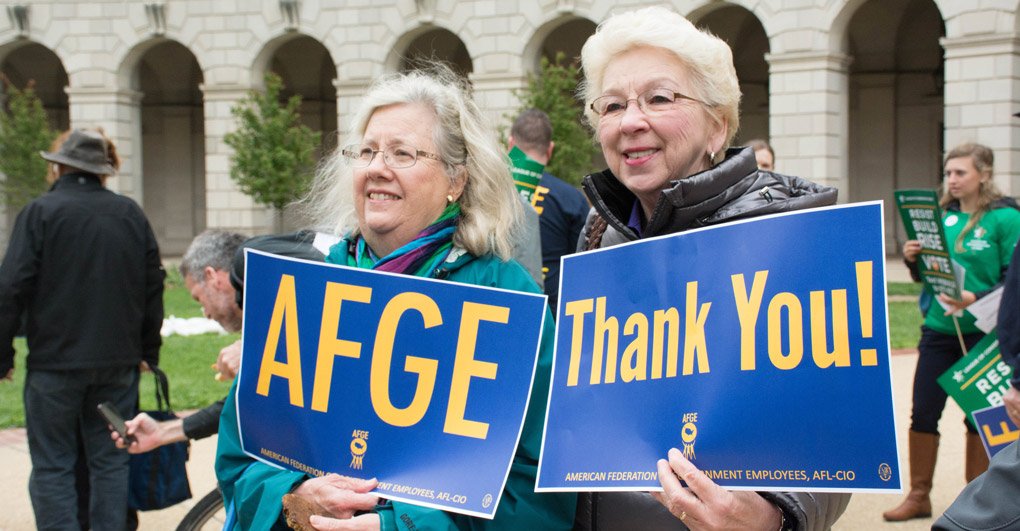 Boyd said she didn’t think people knew what EPA does, but the Climate March and these thank you events changed her mind.

Boyd got a cookie from Carol Relitz, a volunteer at the event. With a tray of cookies in her hand and a contagious smile on her face, Relitz told AFGE that she volunteered because she believes in the work that the EPA does.

“EPA employees really believe in what they do, so I got to support them,” she said.

The administration has proposed to cut the agency’s budget in 2018 by 31%, or $2.6 billion. The EPA’s workforce of 15,376 would be cut by 25%, or 3,829 employees. More than 50 environmental protection programs would be cut. They would also slash funding for cleaning up hazardous waste sites by 30%.

“Our scientists are very concerned,” said Liz Schmitt of the Union of Concerned Scientists.

J. David Cox Sr., president of AFGE which represents EPA employees said EPA has made a difference in every community including his. One of the worst toxic dumps is in his hometown of Kannapolis, North Carolina, and EPA has been constantly working to clean it up. Cutting the EPA budget is wrong and un-American.

“AFGE will stand firm and fight with everything we’ve got against anybody who tries to cut the EPA budget,” Cox told the cheering crowd. "We will fight to protect our environment and the EPA!”