Working in a prison has never been an easy job. Every day, our nation's correctional workers put their lives on the line to keep the peace in our communities, even as inmate populations grow and funding stays stagnant.

We all know that something must be done to curb inmate overpopulation. But rather than giving our public prisons the resources they need to house them, Congress and state governments have been quietly outsourcing the job to mega-corporations running private, for-profit prisons.

You heard that right – corporate America is now using incarceration as a profit center.

These private companies rake in billions of dollars from federal and state governments each year. Most operate at the state level, housing 6% of all state inmates, or over 90,000 people based on 2014 statistics. They spend millions each year lobbying lawmakers to believe that for-profit prisons are cheaper than professional public prisons. According to an in-depth report by Mother Jones magazine, however, not much taxpayer money is actually being saved – if any. And it is coming at a tremendously high cost to the people staffing these facilities.

For starters, the staff at many of the private prisons don't receive adequate training for the job. Serving as a correctional officer is a very demanding job, and prisons are more dangerous for both correctional workers and inmates when these skills are lacking. At federal BOP facilities, staff undergo intensive training to maintain safety and good order in our prisons.

"Federal correctional officers are the most professional, highly trained correctional workers in the world, and they are uniquely equipped to handle the demands of inmate supervision," AFGE National President J. David Cox Sr. said. "Taking this responsibility out of their hands puts our staff and our communities in a dangerous position."

Even with the best training, the private prison industry is a risky proposition. The companies profiting from these prisons take advantage of their poorly trained staff by paying them less than state and federal correctional officers, forcing many private prison employees to work multiple jobs to afford basics. And to make more profits, private prison companies count on recidivism, rather than rehabilitation. If inmates re-offend, they get sent back to jail to start the money making cycle all over again. 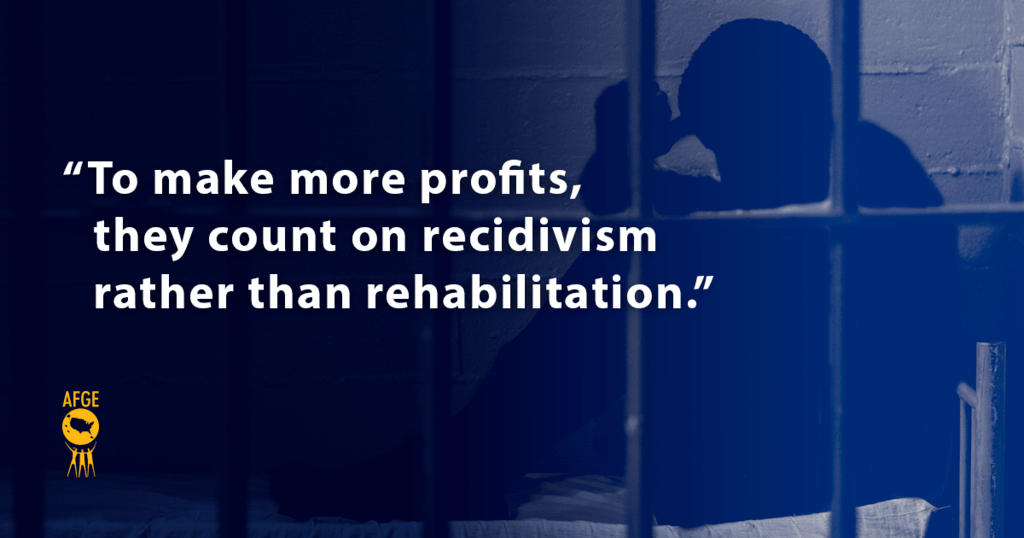 "Imagine privatizing the NYPD – it makes no sense," Young said. "The public would never allow it, so why should they allow privatization of a job our taxes pay for? We believe the more this issue is exposed, the more people will speak out for a return to professional pubic prisons. Putting profits ahead of public safety is a risk to our communities, and we can't stand for it."

This article is the first of several in our ongoing "Private Prisons: A Public Problem" series, which will take a look at the dangerous consequences of a private prison system in the United States. Learn more about AFGE's efforts to promote safety and professionalism in America's prisons at the Safe Prisons Project page of the AFGE website.