Have you ever given much thought to ketchup? It may seem like an odd question, but bear with me for a minute.

Ketchup is a wonderful condiment. You see it everywhere. You can use it on a hot dog, hamburger, French fries – or even in the case of President Richard Nixon – cottage cheese. Ketchup is ubiquitous. You might not even notice it’s gone until you reach for the empty bottle.

As a federal worker, you are as essential to making our country run as ketchup is essential to enjoying a ballgame or a Fourth of July barbeque. Neither are the first thing that comes to mind when you think about eating or working, but we'd sure miss you both if you were gone.

A shortage of either you or ketchup would change our way of life. Unfortunately, while ketchup is still plentiful – despite attempts to jazz it up it in the past – federal employees are left scraping the bottom of the bottle.

Six years ago, the government initiated what was originally intended to be a two-year pay freeze. That freeze was extended by one more year, and was followed by two years of meager 1 percent across-the-board increases, and one year of a 1.3 percent increase – none of which, alone or together kept pace with inflation. Now, six years after that “sacrifice” began, civil servants are still suffering. In 2016, locality increases only provided a scant 0.3 percent raise for you working people, while inflation climbed 1 percent. 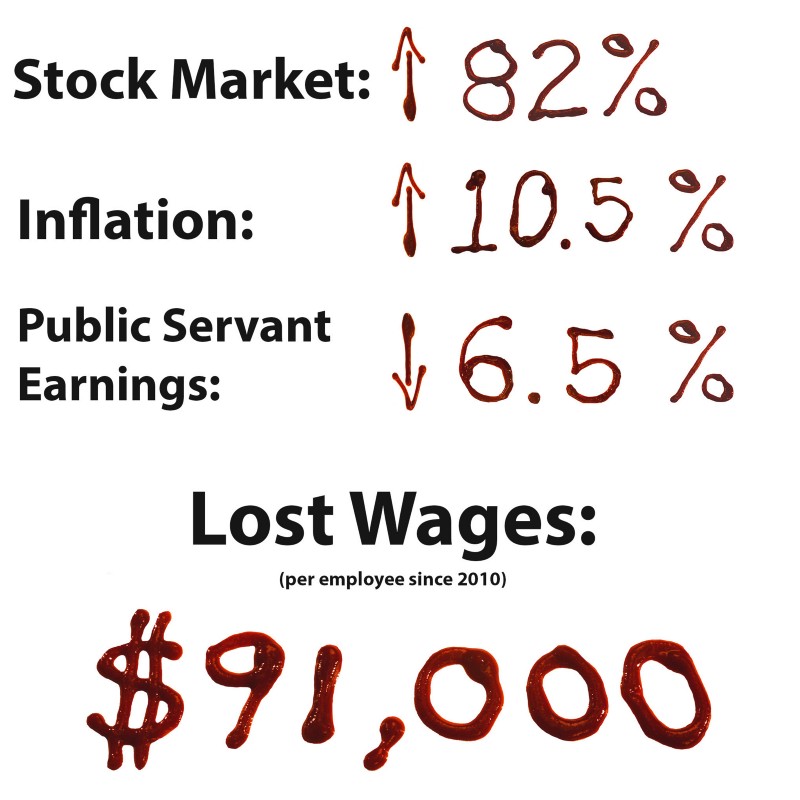 Thanks to years of those pay freezes, retirement cuts, and furloughs, you're earning 6.5 percent less today than you did at the start of the decade. When adjusted for inflation, that’s $91,000 in lost wages since 2010! These cuts represent more than just a line item on a budget, but a family that cannot afford to send their child to college, or make their mortgage payment.

Like other hardworking Americans, you do the work that keeps our nation healthy, prosperous, and strong. You are the TSA Officers moving air travelers safely to see their families, the doctors and nurses caring for our veterans, the correctional workers keeping criminals off our streets, the agents protecting our borders, and everyone in between.

That's why you deserve to catch up. The stock market is up 82 percent, and inflation has risen 10.5 percent, but your wages have stagnated. Many of you struggle to keep food on the table, pay your bills, and live comfortably because every day you’ve worked in the last six years, you’ve earned less than the day before.

Earlier this year Rep. Gerald Connolly, Va., introduced a bill in Congress - the Federal Adjustment of Income Rates Act – that calls for 5.3 percent catch-up pay in 2017. It has garnered some support on Capitol Hill, but not enough to make it law – yet. You have sacrificed your wages most of this decade to help pull America out of recession and into prosperity, and we need to pay you back.

Sure, a catch up adjustment won’t fix everything, but after losing out on the $182 billion Congress has cut in pay and benefits since 2010, it’s a start.

You wouldn’t want to cook your burgers, or order French fries if you couldn’t have ketchup. We can’t keep our democracy running if we don’t have people to make sure the day-to-day work gets done. A 5.3 percent catch-up provision for you, our federal workforce, isn’t just a garnish, it’s what’s owed.