For April Lott, working to better the lives of her fellow South Carolinians has been a rewarding journey. From advocating for workplace rights for Social Security Administration employees to promoting safer workplaces for people in Charleston, April has done it all in just a few short years.

Because of her service as president of AFGE Local 3627 since 2014 as well as her two years of work in her local labor movement, April was elected to serve as president of the Charleston Central Labor Council in July.

April is a paralegal specialist for the Office of Adjudication and Review and has served SSA for 23 years in numerous positions. Her local covers 38 hearings offices in 8 states: South Carolina, North Carolina, Florida, Georgia, Mississippi, Alabama, Tennessee, and Kentucky. Before joining SSA, she worked for two years at the General Service Administration. 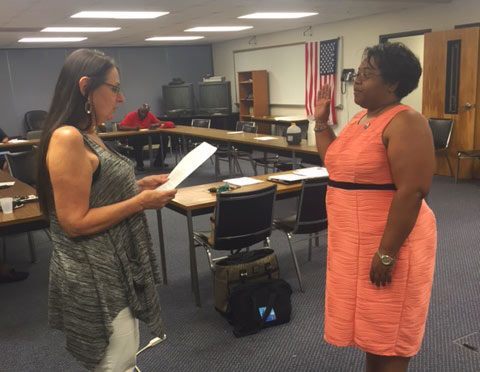 Besides serving as Local 3627 president, she’s a regional vice president for AFGE National Council of SSA Office of Disability Adjudication and Review Council 215. April’s work on behalf of the CLC touches countless lives in her community. Not many people, for example, know that health and safety in the workplace is a major issue in South Carolina.

In 2015 alone, 92,000 people were injured on the job, many of whom were left permanently disabled, unable to support themselves or their families. Earlier this year, the CLC’s call for safer workplaces prompted the mayors from the City of Charleston and the City of North Charleston to rededicate themselves to improving safety and health in every workplace.

The mayors also presented the unions with proclamations in observance of Workers’ Memorial Day. Working with the other unions to bring this important issue to the front burner of the local government made her proud to be a part of her local labor movement.

On June 17, 2015, a gunman murdered nine people at the Emanuel African Methodist Episcopal Church in downtown Charleston. April and her fellow union members mourned the lives lost in the tragedy that affected so many union workers. On the one-year anniversary of the shooting, the CLC participated in the Emanuel 9 Unity Walk to honor the victims and celebrate Charleston's unity.

April says the project that she’s most proud of is the Charleston Area Black Expo where she spoke to hundreds of people last year about the importance of labor unions. She, along with other CLC officers, set up a booth to distribute union swag and information about issues affecting the community.

In her new role, April says she's ready to show South Carolina families the power of joining a union.

“My number one priority right now is to join forces with other unions and show a strong united front for issues involving the South Carolina workers,” she said.

As they’re trying to organize the Boeing Manufacturing Plant, the CLC has been helping IAM with its organizing efforts. April recently attended a picnic and talked with several Boeing employees about the importance of joining a union.

“I had the honor of attending the Leadership meeting in Orlando where AFGE recognized the need to be Big Enough to Win,” she said. “We saw the need to put a positive face with the labor movement and recognized that it started at the local level in our communities.”