This is the second segment of AFGE’s 4-part series: Surviving COVID: How AFGE Members Took on a Once-in-a-Century Public Health Crisis

Years ago, it would have been unthinkable that the United States, one of the world’s most medically advanced countries, could succumb to a pandemic and lead the world in the number of deaths and infections. After all, this was 2020 – more than 100 years since the U.S. faced the deadliest global pandemic yet – the 1918 flu that infected one-third of the world population and killed 50 million people worldwide, including 657,000 in the United States.

With so many advances in technology and medical breakthroughs since then, it came as a shock to Americans, and indeed those around the world, that the U.S. failed to protect its own citizens from the virus while many other less medically advanced nations seemed far better prepared to handle the pandemic.

But to those who paid close attention, the failure was not exactly a surprise. In fact, health experts had warned about this scenario when the Trump administration dissolved the White House National Security Council Directorate for Global Health Security and Biodefense in the spring of 2018. This task force was established in 2014 by the Obama administration to monitor global health risks, including pandemics like COVID-19, and to coordinate the federal government’s response.

The disbanding of the office came as the Trump administration attempted to cut funding for global health programs essential to stopping the outbreak where it started. The administration also repeatedly sought funding cuts for the Centers for Disease Control and Prevention (CDC), the main agency that deals with this kind of disease. All these actions were part of a partisan, ideological commitment to shrinking the size of government, no matter the practical effects.

“What this all adds up to is a potentially really concerning rollback of progress on U.S. health security preparedness,” a former government official specialized in foreign disaster assistance pointed out.

So, when the first known death from the new virus was confirmed on Jan. 11, 2020 by the Chinese government, followed by confirmed cases in Thailand, Japan, and South Korea, the U.S. was not prepared.

Weak, ineffective leadership in the White House also played a major role in our nation’s failed response. President Trump repeatedly downplayed the virus, comparing it to the far less deadly seasonal flu. He refused to encourage people to wear masks or social distance. In fact, he mocked people who wore masks. He also urged his supporters to protest states’ restrictions on large gatherings, mask mandates, and social distancing policies, encouraging his supporters on Twitter to “LIBERATE MICHIGAN!” and “LIBERATE MINNESOTA!”

There was no sense of urgency from the White House to prepare or protect everyday Americans from the outbreak that was ravaging the other side of the world -- much less the government employees already serving on the front lines of the pandemic.

As the presidential election drew closer, Trump continued to hold in-person campaign rallies where most attendees did not wear masks. He regularly lashed out at our nation’s medical experts who tried to warn Americans about the danger of COVID-19. As a result, Dr. Anthony Fauci of the National Institutes of Health and his family received death threats from Trump’s supporters and had to receive beefed up security protection.

The failure by our political leadership to act quickly to prepare ourselves for the pandemic meant we couldn’t crank up the production of masks, hand sanitizer, cleaning supplies, PPE, and medical equipment, including life-saving ventilators, in time. By early April, the federal government’s emergency national stockpile of PPE and medical equipment was depleted. Local and state governments were left scrambling to find their own in the private market, competing against one another and the federal government in bidding wars for the prized supplies.

Hand sanitizer, masks, and anti-viral cleaning supplies flew off the shelves and were unavailable for months, forcing people to make their own to a varying degree of effectiveness. There was even a widespread shortage of toilet paper. 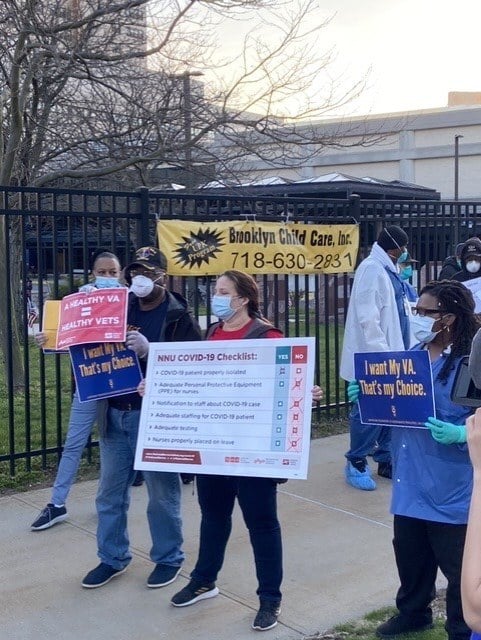 Activists in Brooklyn, NY hold rally to advocate for PPE for VA employees.

The Trump administration’s delayed response to the emerging pandemic, coupled with its calculated political moves to downplay the seriousness of the pandemic for the president’s electoral gain, not only damaged the U.S.’s standing in the world but also made possible the deaths of hundreds of thousands of Americans in less than one year.

The lack of preparedness spilt over at federal agencies across the country. By the end of March, it was pure chaos. A critical shortage of PPE plagued federal offices, putting federal employees and the public they served in danger. At VA hospitals, the situation was particularly dire.

One VA employee reported employees were given only one surgical mask per day to work in direct patient care in a quarantine unit full of COVID-19 patients. Employees were not notified when patients or staff in the facility tested positive. They only heard from their colleagues by word of mouth. The guidelines said employees should be tested once a week, but they were not. Many employees who could telework were not allowed to.

Another VA employee who worked in an inpatient mental health unit reported that patients were only given one mask to wear for the entire week. Because only the ER and the COVID-19 units had access to N95 respirators, the nurses in other units tried to buy N95 masks but could not find them anywhere. They also were not tested for COVID-19. 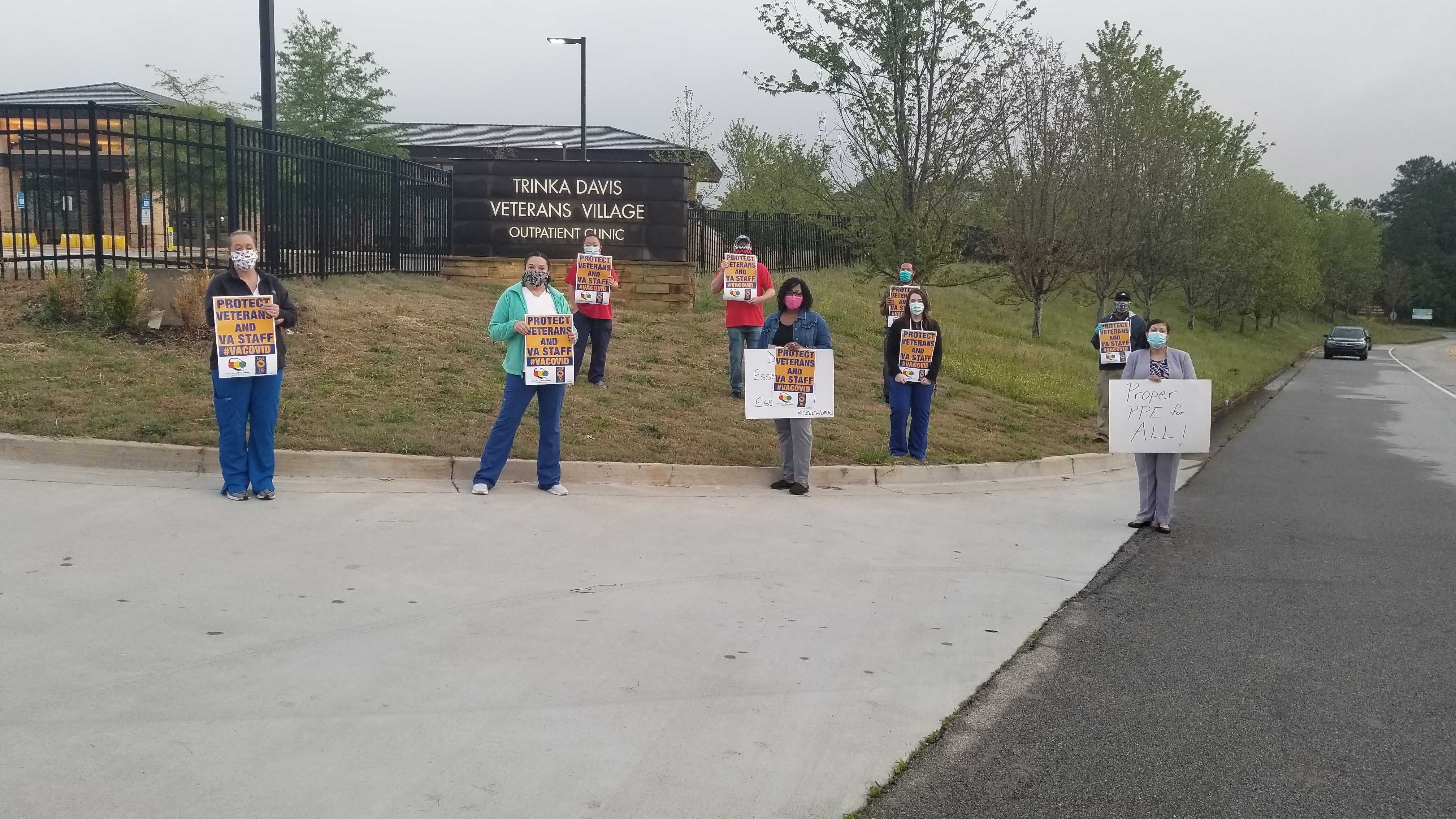 Activists rally for protective equipment for VA employees during the height of the pandemic.

At one VA, there was no additional cleaning done in the common areas and most of the public hand sanitizer stations were empty. A housekeeper reported that they were told to remove hand sanitizer from the stations because people used it too much. As a result, employees did not feel safe touching high-contact areas such as doors and elevators. In addition, management flouted social-distancing guidelines by placing too many employees in each work area.

A nurse reported symptoms of COVID-19 to the screening tent prior to her shift but was told to return to work. She later tested positive for the virus, but management would not let the colleagues she exposed to the virus quarantine. Instead, because their clinic was closed due to an ill doctor, her colleagues were sent to help with other units in the hospital. Now all the people they encountered were at risk, including unsuspecting veterans.

TSA officers at airports across the country did not feel safe either.

One TSA employee reported that there had been no additional sanitation or disinfecting of the work area. When there was a positive COVID-19 case, TSA did not notify officers in a timely manner. There was no social distancing.

Another TSA worker stated that there were too many employees working and not enough workload. There was no social distancing at checkpoints or in the baggage area. Contact tracing was insufficient. There was no access to COVID-19 testing for employees on the ground.

A TSA employee said weather and safety leave was not being used effectively. Officers were still required to be at work on a full work week, creating a lack of social distancing and more outbreaks in break rooms and checkpoints.

One DoD employee reported that there had been multiple positive COVID-19 cases at their facility, but employees were required to keep working and just wear their own masks. Employees worked in cubicles less than 6 feet apart and were expected to bring their own cleaning supplies and clean their own work areas. When employees were exposed to COVID-19 at work, they were not allowed to quarantine and were expected to continue reporting to work.

Another DoD employee reported that they had to contact OSHA because there were no gloves being provided to employees. They also had to find their own masks and disinfecting wipes. The agency also would not test employees for COVID-19.

An employee at the U.S. Department of Agriculture Food Safety and Inspection Service (USDA FSIS) reported that employees were expected to continue to work even if they tested positive. While reports of widespread death and disease among processing plant workers gripped the nation, spurring fears of a meat shortage, the workers at FSIS did not receive hazard pay for continuing their high-risk work. To add insult to injury, the face masks the agency issued were not even adequate. The employee felt as though the agency did not care about them or their welfare -- it only cared about keeping slaughterhouses operating.

Telework woes and the war on workers

Telework has been a valuable, essential, and successful tool in continuing government operations -- especially during emergencies.

But before COVID-19 hit, the Trump administration had either drastically cut or cancelled several telework programs at various agencies such as Social Security Administration, the Environmental Protection Agency, the Department of Agriculture, and the Department of Education, as part of its ongoing war against federal workers and unions.

Even after the first death from the coronavirus was reported in the United States in February, SSA announced it would cut or cancel the 20-year-old telework program for thousands of workers despite the program’s crucial role in reducing the hearing backlog and getting work done during emergencies.

Days later, however, the administration reversed course completely, directing agency heads to review their continuity of operation plans to make sure that as many people as possible had been identified as “telework ready” in preparation for the coronavirus, which by then had killed 3,200 people and infected 92,800 worldwide.

When the administration finally took steps to expand telework to help the government remain open during the pandemic, it was slow to act, and the actual implementation on the ground was haphazard and insufficient because their own previous attacks on telework programs had hampered the government’s readiness.

In one common situation, employees were instructed to telework, then recalled because of issues with IT infrastructure. Some high-risk employees were asked to come into the office and risk exposure to coronavirus because the administration’s initial delays had prevented them from being trained on telework in a timely manner.

While the administration should have been preparing for this epidemic by expanding telework opportunities, performing network reliability tests, and ordering massive amounts of PPE, agencies like the VA were instead busy kicking unions out of offices, disbanding joint labor-management cooperation teams, including health and safety committees, and forcing employee representatives off government email systems.

This created barriers to information flow between front-line employees and management, making it more difficult for agencies to respond in real time to the needs of employees trying to curb the spread of the disease.

As the pandemic raged, the Trump administration’s war on federal workers was coming back to haunt them.

Next week we’ll discuss what AFGE at all levels did to protect our members in the absence of leadership from the White House.

Missed the first segment of the series? Read it here: