This is the first segment of AFGE’s 4-part series: Surviving COVID: How AFGE Members Took on a Once-in-a-Century Public Health Crisis

AFGE turns 89 on Aug. 18. Since its creation, our union’s mission has been to build a better workplace for government employees – and that’s what we’ve been doing for the past nine decades.

Our union was born in the depths of the Great Depression, during one of the most uncertain times in our nation’s history. Back then, federal employees did not have many of the basic rights they enjoy today, like health insurance, overtime pay, and weekends without work. It was an uphill battle from the start, but we kept at it.

Since our humble beginning, we have won so many important workplace rights for government workers. Some of our fights took years or even decades, but we never gave up. And that’s precisely what makes us AFGE. 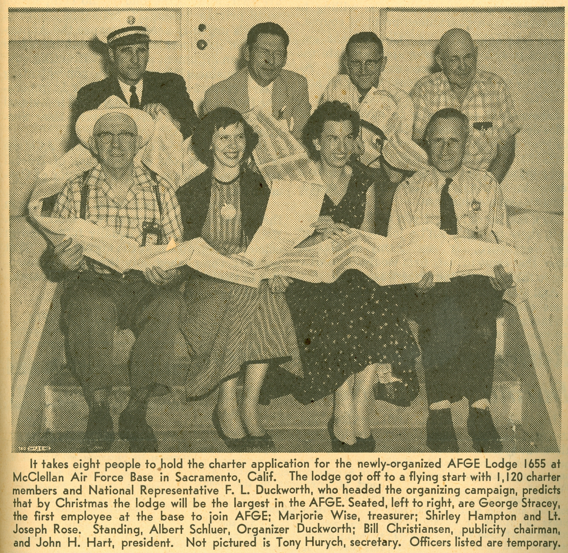 The COVID-19 pandemic is one of the most, if not the single most, challenging issues our union has ever faced. In 2020, tens of thousands of civilian federal workers contracted the virus. Many lost their lives.

While the pandemic raged, our union was also in the middle of a years-long battle with the most anti-worker administration in our country’s history, which had issued a series of policies that devastated the federal workforce, such as hostile, illegal executive orders and the longest government shutdown in history.

More lives could have been lost if it was not for our union’s rapid responses and the selflessness shown by AFGE members in protecting one another. Here’s our story.

In January 2020, when the deadly coronavirus was ravaging Asia and was on its way to the United States, the AFGE TSA Council, which represents 46,000 Transportation Security Officers (TSOs) nationwide, asked TSA Administrator David Pekoske to instruct agency management to allow the officers to wear N95 respiratory masks designed to protect wearers against airborne pathogens.

The council made that request because regular, non-medical masks would not provide enough protection for TSOs who were uniquely susceptible to the virus since they screened more than 2 million passengers every day, many of whom were coming from emerging global hotspots.

Pekoske initially denied the council’s request, reportedly because the agency didn’t want to cause alarm at airports – in line with the Trump administration’s initial response of downplaying the pandemic.

Weeks later, Pekoske and the Trump administration finally relented, agreeing to let the TSOs wear N95 masks. Without the council’s early recognition of the health and safety problems presented by the novel coronavirus and our union’s push for life-saving personal protective equipment (PPE), more TSOs could have been infected and possibly died in these crucial early days.

By the spring, the pandemic hit the U.S. hard. In the few short months since we first heard about this deadly new virus, our country became the world leader in confirmed cases – over 50,000. It was chaos at the Department of Veteran Affairs’ hospitals. 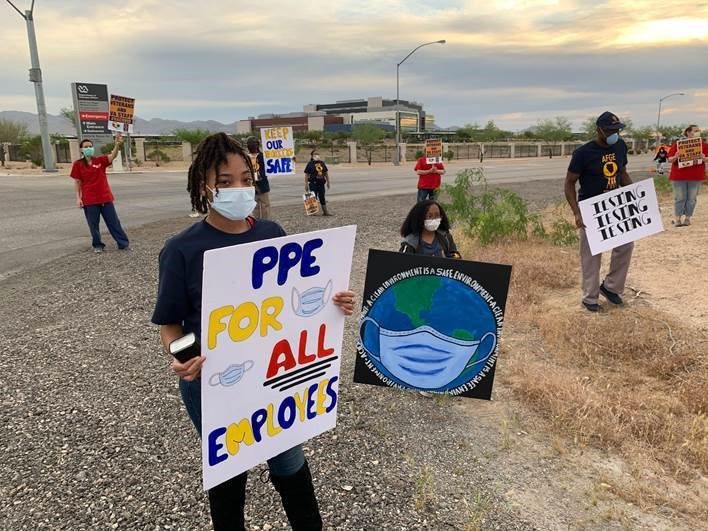 In Las Vegas, VA hospital management rationed masks and even told employees they didn’t need a mask unless they worked in certain areas. To protect the workforce, AFGE Local 1224 staged a rally to demand that face masks, gloves, and cleaning supplies be provided to all VA employees at the hospital. VA management eventually provided masks and cleaning supplies as demanded by the local.

In West Virginia, the Bureau of Prisons (BOP) continued to transfer inmates from other states to quarantine in the state’s prisons without adequately screening them for the virus. Fearing mass infection in their prisons and local community, AFGE Locals 420 and 425 at the Federal Correctional Institution (FCI) Hazelton and FCI Gilmer reached out to local and congressional leaders for help. They also took to the streets to shine a spotlight on the practice that endangered the inmates, correctional officers, and the community they live in.

After a series of conversations with lawmakers and local leaders, the Department of Justice and BOP halted the transfers – but not before five of the transferred inmates tested positive for the virus, confirming what the locals had feared. Still, it was a remarkable victory that helped prevent further spread of the virus and potential deaths in West Virginia. 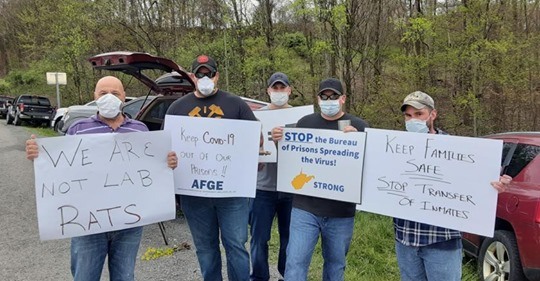 Stories like these have emerged all over the country since the beginning of the pandemic, illustrating how AFGE has played a crucial role in protecting the federal workforce – and the broader community our members serve – against COVID-19 in the absence of national leadership and the chaos that followed.

At every level, our union recognized early that we had to take serious action and provide serious leadership -- even though doing so was going to be difficult.

President Donald Trump was not only downplaying the deadly pandemic, squandering our country’s early preparedness and prevention, but he also actively undermined medical experts’ efforts to protect Americans by comparing COVID-19 to the far-less deadly and contagious seasonal flu and encouraging people not to wear masks.

By the end of 2020, the United States led the world both in the numbers of cases and deaths – more than 20 million people had been infected with more than 346,000 dead. A disastrous result.

Immediately after the pandemic became a serious issue in early 2020, AFGE set up an internal Coronavirus Task Force made up of key staff, national leadership, council leadership, and subject matter experts. We connected different resources and levels of our union together to facilitate the flow of information and allow decisions to be made as quickly as events dictated. With a fast-moving pandemic threatening our members, we couldn’t afford to waste any time.

As federal agencies failed to provide enough PPE and general protection to its employees, AFGE started organizing our members around an aggressive strategy that involved heavy media pressure, bargaining guidance, legal action, formal complaints, and any other tool we could think of to create leverage.

By executing our strategy relentlessly and effectively, we won major victories for AFGE members like maximizing telework during the early days of the pandemic, expanding the use and availability of PPE, winning the first OSHA citation in the public sector, preventing widespread premature return to the worksite, and much more -- all while the White House was working feverishly to downplay the threat of the virus and its potential impact on workers.

At the end of 2020, more than 100,000 federal workers had tested positive for COVID-19, half of whom were civilians. Without AFGE’s actions, the infection rate and death toll would undoubtedly be much higher. For many workers, being part of AFGE is about having a voice at work. But during the coronavirus pandemic, our union, AFGE, was proven to be one of the most important protections against the deadly virus government workers could have.

Next week we’ll discuss why the U.S. was left unprepared for COVID-19 and what happened at government agencies across the country as a result of the federal government’s failed response.