The Fight to Deliver Your Catch Up Pay Is Gaining Momentum

How can you tell if your representatives work for you or against you? How do they show they value your career in public service or recognize the role you play to move this country forward?

They listen and legislate.

Earlier this month, hundreds of AFGE members from across the country gathered in the rain to call for a 5.3 percent pay adjustment (it's really just a catch up in pay).

In the two weeks that followed, 33 members of Congress showed they're standing up for public servants. They've co-sponsored a bill that would reverse some of the damage their anti-worker colleagues have forced you to endure, including:

The bill, the Federal Adjustment of Income Rates (FAIR) Act introduced by Congressman Gerry Connolly of Virginia, would guarantee a 3.9% catch-up pay adjustment and a 1.4% locality pay adjustment in 2017.

AFGE thanks cosponsors of the bill for their support and calls on both the House and the Senate to do the right thing and pass this bill.

If you think federal employees deserve to have a pay adjustment that helps them catch up,share this on Facebook. 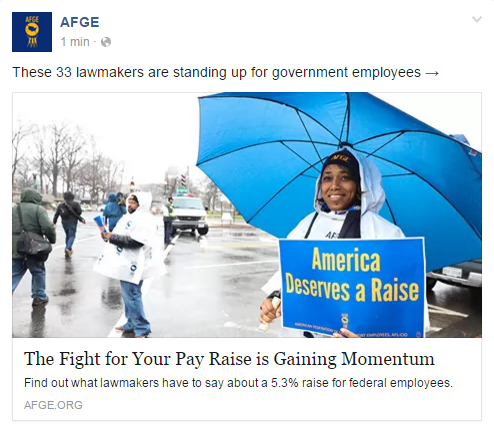 Here’s what they have to say about the bill and why it’s important:

“No other group has been asked to sacrifice more than our federal workforce, who have endured years of pay freezes, increased retirement contributions, no locality pay, sequestration cuts, and a government shutdown. This bill is a down payment on trying to help restore some of the losses that have been incurred by our dedicated federal employees, and I hope demonstrates we value their public service.”

“These employees deserve to be compensated fairly for the critical work they perform every day for our country. They deserve our gratitude.”

“President Obama’s suggested increase of 1.6 percent is good, but it is not enough. This bill will ensure that our federal workers are fairly compensated, and it will help our government recruit and retain a highly-skilled workforce.”

“Federal employees have been the perennial punching bag for many of our colleagues despite the high quality of their work under unprecedented circumstances. Years of cuts, which have even eaten into pensions, have left federal employees far behind their private sector counterparts.”

“The men and women of our federal workforce deserve a robust pay increase after years of eroding salaries.”

“We must pay our federal workers a competitive wage to attract and retain top talent to carry out essential government services. This bill will honor our civil servants’ commitment to public service by working toward providing them a fair pay raise.”

“The introduction of this legislation signifies an effort to push for a significant and real pay increase for our federal workers in calendar year 2017 that’s in sync with the 21st Century economy."

“Americans want the best and brightest to serve our country. But if [people] in Congress continue to denigrate public service and reduce the pay and benefits of our federal workers, then we will have a difficult time retaining and attracting top-talent to the public sector. That’s why I’m proud to co-sponsor the FAIR Act, which would reverse the recent indiscriminate and dangerous pay cuts to our federal workforce.”

“America’s federal employees keep our country safe, advance new frontiers in science and research, and serve taxpayers each day. America doesn’t work without a high-performing federal workforce and that starts with making sure their pay is competitive and appropriate. I am proud to defend federal workers against misguided attacks and proud to stand with my colleagues in supporting a pay raise for federal employees.”

“Our federal workers endured years of pay freezes, furloughs, retirement benefit cuts, and a government shutdown. I am proud to again cosponsor this legislation to build on that success and commit to paying our civil servants for their vital contributions to millions of American families.”

Is your representative on the full list of FAIR Act Cosponsors? Check below: