This Is What the Future of the Labor Movement Looks Like

The future of the labor movement is in Chicago this week as more than 1,000 young activists from across the country gather for the AFL-CIO NextUp Summit to move forward their goal of building young worker power for economic and social justice. AFGE is well represented. More than 70 AFGE young members and staff are here in Chicago, making AFGE one of the largest delegations. AFGE President J. David Cox Sr. will also be here this weekend to address AFGE members and participate in a panel discussion about young 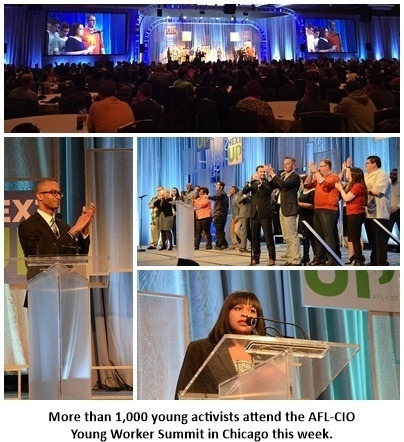 workers’ role in the labor movement.

The conference is chock-full of great training sessions and workshops to prepare young workers to fight for issues important to them.

Actor Danny Glover is scheduled to speak on the first day of the summit to discuss the importance of being an activist. He recently joined the postal workers’ campaign to save the U.S. Postal Service and preserve good jobs. His parents were able to buy their first home because of their jobs at the Postal Service.

Attendees will learn about The Story of Chicago from its workers and activists. They will learn about organizing on campuses, storytelling, the campaigns young workers are waging, organizing around student debt and higher education, leadership skills, and mobilization, among other things.

Rep. Keith Ellison of Minnesota will be speaking about policymaking for the future. AFL-CIO President Richard Trumka will discuss raising wages. AFL-CIO Secretary Treasurer Liz Shuler will discuss why the future of the labor movement depends on these young workers. AFL-CIO Executive Vice-President Tefere Gebre will discuss why it’s important to take action now.

Stay tuned for more coverage from this great event in the next edition of Week in Review!