These are the prohibited items that TSA officers find in passengers’ carry-on bags all the time at airport checkpoints. And it’s getting worse.

Last year, TSA Officers discovered 2,653 firearms at 236 airports – a 20 percent increase from 2014 and a new record. Of the firearms found, more than four out of five were loaded. 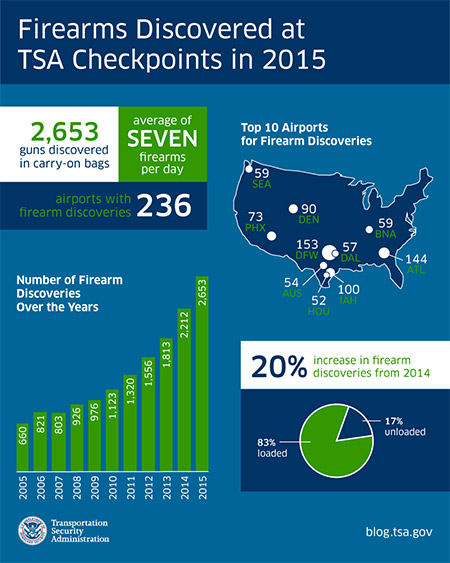 The top five airports for firearm findings were:

Not only was there an uptick in firearms, there was also an increase in the number of airline passengers. TSA Officers screened over 708 million passengers in 2015—40 million more than 2014.

TSA Officers continue to do an outstanding job at keeping the flying public safe. It’s a tough job, protecting lives and all. And they’re doing this while trying to knock down obstacles in the workplace.

“Morale for TSA Officers is at an all-time low. They are consistently treated like second class employees as compared to other federal workers,” AFGE National President J. David Cox, Sr. said. “The continuous hike in loaded firearms and other dangerous objects discovered in carry-on bags shows just how essential these public servants are. It’s high time TSA started treating them like it.”

AFGE is currently negotiating with TSA for a new, improved union contract and fair pay for all TSA Officers.

Thanks to AFGE, TSOs now have more advanced training opportunities, a fair process for annual leave bids, the ability to trade shifts with their co-workers, and an increased uniform allowance, but there’s still a lot more to be done to make TSA a better workplace for all TSOs.  AFGE will keep fighting until TSOs get the respect they have earned.