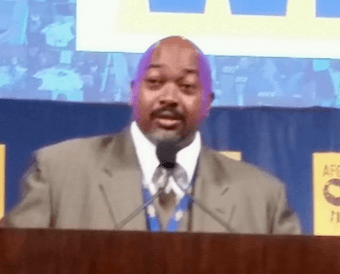 William Boseman is the Mid-Atlantic Regional Vice President for the Council of Prison Locals-33.  He started his career as a Correctional Officer with the Bureau of Prison at FCC Butner, NC on March 17, 1996.  He joined the Union in 1996 and has been a Union member since.  In 2002, William became the Chief Steward for Local 405 at FCC Butner.  He later held the position of Local Vice President until becoming Local President.  In 2013, William became the Mid-Atlantic Regional Fair Practice Coordinator.  In 2015, he was appointed as the National Health and Safety/OWCP National Representative.

In 2017, he became the Mid-Atlantic Regional Vice President for the Council of Prison Locals-33.  In his tenure, he received several AFGE and Council awards to include the A. Philip Randolph-Hubert H. Humphrey Human Rights Award and the Michael Castelle National Fair Practices Leadership Award.  William is well versed in EEO, Arbitration, and MSPB.  William also hold several OSHA certifications.  He believes in equality and justice for all.  William is responsible for oversight and assistance of Locals at 20 facilities in the States of North Carolina, Virginia, West Virginia, Maryland and Tennessee.