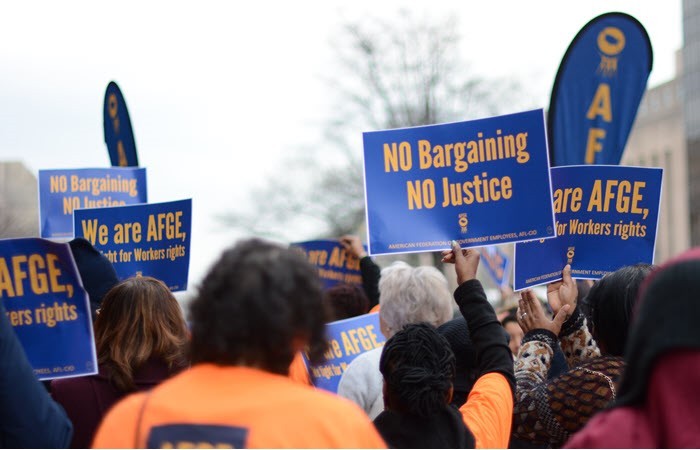 WASHINGTON – The American Federation of Government Employees has charged management at Luke Air Force Base in Arizona with violating federal labor law by sending workers a bogus document that purports to be a new contract between the union and the agency.

“The actions by management officials at Luke Air Force Base to impose non-negotiated work rules on employees covered by the union is a clear violation of the law, and we intend to fight this illegal action with every resource at our disposal,” AFGE National President Everett Kelley said.

AFGE Local 1547 and the agency previously had signed off on 34 articles for a new contract, but management – through the agency’s Civilian Personnel Office (CPO) – refused to resume negotiations on the remaining two articles unless the union agreed to reopen the previously agreed upon articles.

“Since the articles had already been completed and signed, both the union and the agency would need to agree on reopening any of those articles under the ground rules that both parties had agreed to follow,” AFGE District 12 National Vice President George McCubbin III said. “Management contends that the union is obligated to reopen these articles to incorporate executive orders signed by President Trump in 2018, yet the executive orders themselves clearly state that this is not the case.”

After walking away from the negotiating table in June, CPO staff notified the union on Aug. 7 that it was unilaterally implementing its own contract and sent the bogus document to all bargaining unit employees and management officials, claiming that it represented a new contract between the agency and the union.

“This is a blatant effort by management, through CPO, to manipulate employees into believing that the Union is a party to that document,” reads the grievance, filed Aug. 21 by AFGE District 12 National Representative Harley Hembd on behalf of the local.

This is not the first time that officials under the Trump administration have refused to negotiate with the union in good faith and illegally implemented fraudulent documents purporting to be negotiated contracts. The Education Department and Environmental Protection Agency both unilaterally imposed non-negotiated management edicts on its workforces, although AFGE forced EPA to go back to the table and complete negotiations on a legitimate contract after filing grievances and unfair labor practice charges against the agency.

“Time and time again, this administration has flouted the law and shown complete disregard for federal workers and their collective bargaining rights,” Kelley said. “We are hopeful that management officials at Luke Air Force Base will reconsider their illegal actions and return to the bargaining table to complete work on a new contract, which is in the best interest of employees, the military, and taxpayers.”