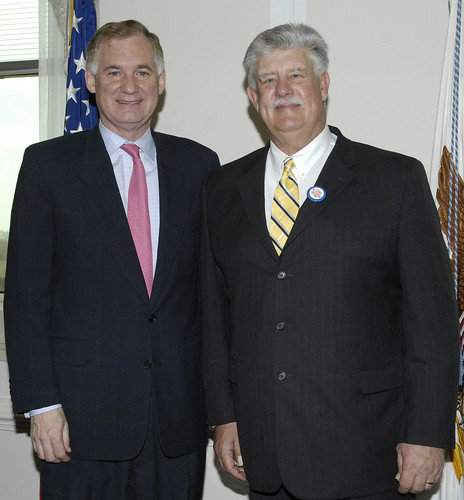 During his election campaign, President Obama sent a letter to AFGE criticizing the NSPS personnel system. In the letter, Obama acknowledged AFGE’s charges that the system is inherently unfair and vowed not to support a system that discriminates against employees and is designed to suppress wages. “We will continue to push for a complete repeal of NSPS both within the administration and through legislation,” said Gage.

“We appreciate Deputy Secretary Lynn’s willingness to meet with us,” said Gage. “We believe Mr. Lynn will be open to further discussions about how labor and management can work effectively.”

During the last eight years, the Bush administration worked feverishly to privatize hundreds of thousands of DoD employees and strip civil servants of their protections against politics and favoritism. Now, AFGE is committed to working with Congress and the new administration to clean up the contracting out mess and eliminate the last remaining vestiges of NSPS. “We are committed to turning the page on the failed policies of the past and we are reaching out to be a responsive partner in the case for good government,” said Gage.

AFGE received encouraging news from the White House and Congress earlier this year when President Obama issued a Presidential Memorandum aimed at ensuring that work that should be performed by federal employees is not instead contracted out, and when Congress introduced legislation to halt the controversial A-76 privatization process.