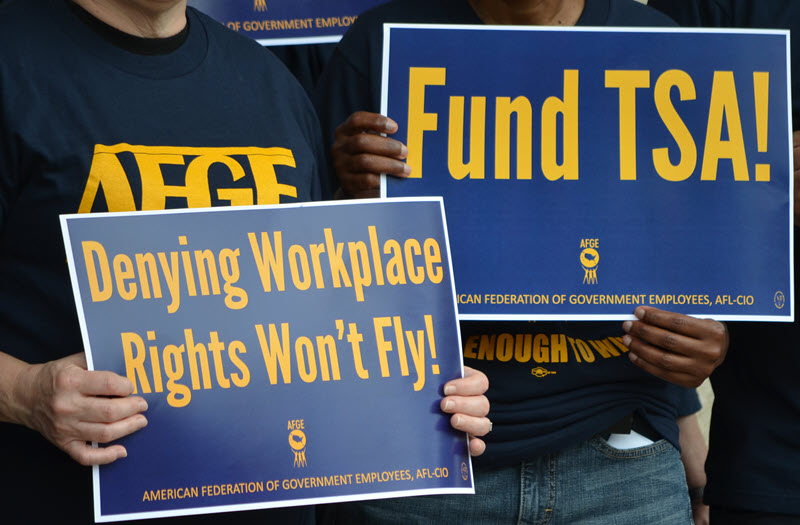 WASHINGTON – Providing federal security officers at our nation’s airports with the same workplace rights and benefits as other federal employees would help enhance aviation security, the head of the largest federal employee union told lawmakers today.

“The best way to describe the status of the TSA officer workforce is separate and unequal,” Cox said in his written testimony.

TSA has two personnel systems: one for Transportation Security Officers (TSOs), and one for all other TSA employees and managers. Only TSOs are denied the ability to appeal adverse personnel decisions to an objective, outside body like the Merit Systems Protection Board (MSPB) or through negotiated grievance procedures.

For years, AFGE has called on Congress to pass a law that would grant TSOs the same workplace rights as other federal workers, also known as Title 5 rights. AFGE represents 45,000 TSOs nationwide.

“Our union knows that rights under Title 5 of the U.S. Code which would ensure TSOs the same fair pay, union rights, and respectful treatment as other federal workers are directly tied to the ability of the workforce provide the highest level of aviation security,” Cox said.

The average starting salary for TSOs is $35,000 annually — less than $17 per hour. TSA management boasts that they provide workers with a performance-based pay and awards system, but AFGE contends that the system is unfair and provides minimum opportunities for pay increases.

TSA officers worked for 35 days during the longest shutdown in government history without knowing when they would be paid again, yet TSA management refuses to pay them a decent wage. “For too long, the TSO workforce has performed their jobs effectively, efficiently, and with a professional demeanor, all the while under duress largely at the hands of TSA management,” Cox wrote.

To make matters worse, at a congressional hearing last month, TSA Administrator David Pekoske refused to commit to continuing to work with the union to collectively bargain and address workplace issues.

“Please be aware that the only progress that has been made in the area of labor relations at TSA has come at the bargaining table,” Cox said.

In all, AFGE recommends that TSA hire an additional 5,000 TSOs as officer retention decreases and passenger volume hits new records; increase starting salaries for new TSOs and provide pay increases to retain long-term TSOs; fully train new TSOs before deploying them to checkpoints; and work with the union to increase the retention of women TSOs.