WASHINGTON – This week the Trump administration was delivered another blow against its attempts to undo our apolitical civil service system and dismantle unions across the country. In a recent decision by an independent arbitrator, the Department of Veterans Affairs was found to be in violation of the existing Master Agreement between the VA and the American Federation of Government Employees by improperly implementing the VA Accountability Act. 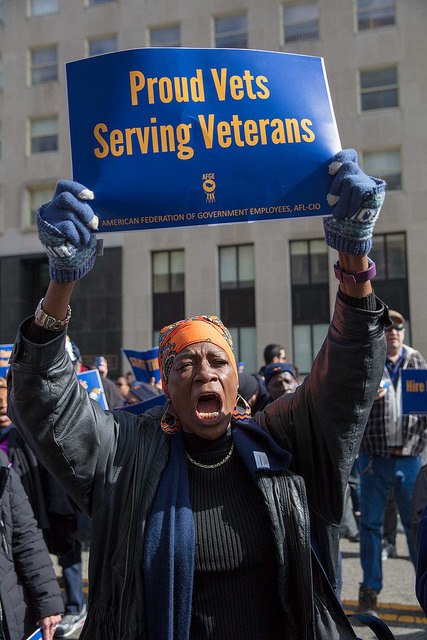 This decision comes on the heels of the August 24 U.S. District Court for the District of Columbia ruling that the Trump administration’s May 25 executive order on official time violated the U.S. Constitution and the separation of powers as established in law, and Wednesday’s guidance from the Office of Personnel Management directing agencies to rescind the provisions of the orders that were enjoined.

“As the president and his administration continue their heinous anti-worker attacks on unions and federal workers, it’s great to see momentum swinging in our direction,” said AFGE National President J. David Cox Sr. “From Missourians voting down right-to-work to our recent victories in the court, it’s clear the American people are wise to the union-busting tactics employed by this administration.”

“For more than a year the VA has been improperly using the so-called Accountability Act to target workers at the VA – one-third of whom are veterans themselves – with the clear intent to stamp out the union,” Cox added. “Veterans’ care or access to it is not improved by firing rank-and-file workers, and now, thanks to this ruling, our members can get back to work making the VA the best health care provider in the country. These women and men have dedicated their lives to caring for veterans at the VA, and they can once again fulfill their duty without the fear of unjust firings from management.”

Last year, after the Department of Veterans Affairs Accountability and Whistleblower Protection Act of 2017 was signed into law, workers at the VA began to face firings, suspensions, and demotions without receiving a performance improvement plan (PIP). At the same time, employees who had worked at the agency for years reported that the standards for their performances were being changed with little-to-no explanation from management. This led to workers, who had gone decades without any negative performance evaluations, being told they were failing – based on the new metrics – without any recourse to improve.