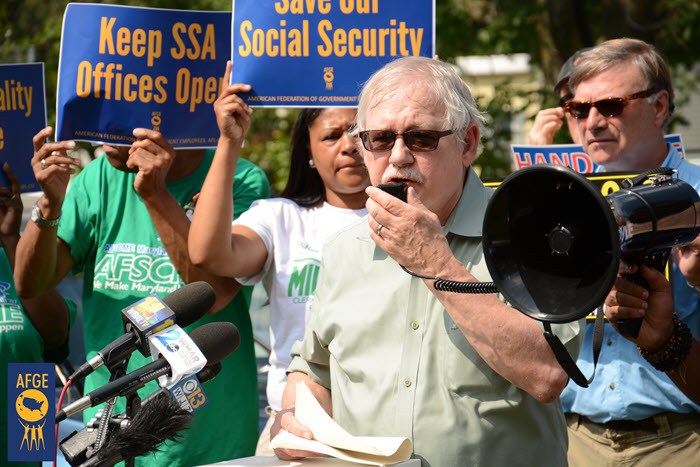 WASHINGTON – The American Federation of Government Employees is obligated under the law to represent all employees covered by our negotiated contracts, but the Social Security Administration is deliberately and illegally restricting the union’s ability to uphold this obligation, AFGE leaders say.

“The agency is attempting to wipe all traces of our union from SSA offices and deny workers their legal rights to representation,” AFGE National President J. David Cox Sr. said.

On Monday, July 9, SSA management unilaterally implemented extensive changes to the contract that had previously been negotiated with AFGE Council 220 to execute President Trump’s May 25 executive orders, which gut federal employees’ workplace rights and protections. The union attempted to negotiate with the agency but SSA managers walked away from the talks after just three days.

“SSA has evicted union representatives from their offices and stripped them of their access to computers, phones, personnel files, and other tools that are vital to effective representation,” said Witold Skwierczynski, president of AFGE’s National Council of SSA Field Operations Locals (AFGE Council 220).

“Bulletin boards that provide employees with information on their rights and how to contact their union representative were ordered to come down at all SSA offices,” Skwierczynski said. “Employees are being denied their right to meet with the union stewards during the workday to address workplace disputes, whistleblower retaliation, discrimination, and other issues.”

On Dec. 7, 2017, SSA gave written notice to AFGE that they were terminating the existing Collective Bargaining Agreement. On March 19, 2018, SSA and the union signed a CBA ground rules agreement that would allow them to exchange contract article proposals on August 9, along with a mutually agreed upon bargaining schedule that would extend over the coming year.

On May 25, President Trump issued 3 executive orders weakening employee unions and eliminating employee civil service protections. On May 30, AFGE filed suit in federal court arguing that the Trump directives violate federal law and the U.S. Constitution. Department of Justice lawyers argued to the court that the EOs constituted only guidance to federal agencies and it was up to each agency on whether they follow the guidance.

On June 5, SSA reneged on the ground rules agreement, in the form of a letter to the union, stating that they were unilaterally applying the executive orders to 21 of the 44 existing Contract Articles. This will in turn allow SSA to:

The union attempted to bargain the changes with SSA from June 27-29, but three days was not enough time to negotiate the extensive changes and contract cuts. No agreement was reached but SSA stated in violation of the law that it would unilaterally implement its proposals on July 9. The union filed an Unfair Labor Practice grievance on June 29 asserting that SSA’s unilateral implementation of its proposals is illegal.

“AFGE will continue to fulfill our legal obligation to represent all employees in the federal government – no matter how ruthless the administration is in trying to shut us down,” Cox said.